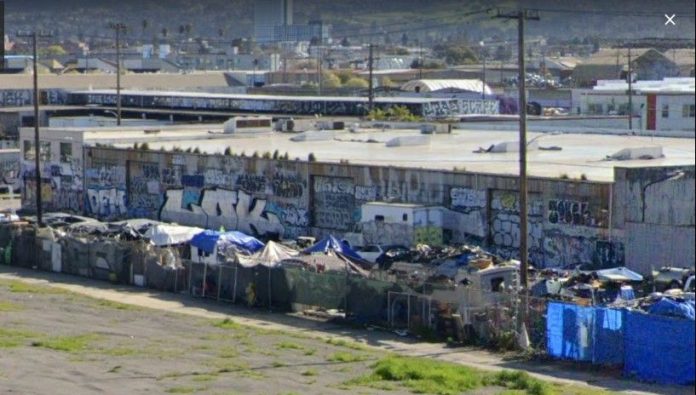 West Oakland’s Wood Street encampment, which has suffered dozens of fires in the last year, will try a new community cabins model with a $4.7 million grant from the state.

The massive, sprawling homeless encampment on Wood Street in West Oakland has been a matter of public debate for years, and at one point was set to become a sanctioned RV “triage center,” but even that plan merely begat endless conflict between residents, property owners, attorneys, and activists. But when one person died in an encampment fire there last month, it brought heightened attention to the tragic conditions at the encampant that’s been ballooning in size.

“The encampment spans nearly 25 city blocks with about 300 people living under freeways in tents, RVs and makeshift shelters amid burned-out vehicles, mounds of trash and dirt,” according to the Chronicle. “The encampment is now so huge that some residents drive buses and motorcycles to get from one end to the other.”

The Chron counts “nearly 90 fires at the site for the 12 months through March.” Even Governor Gavin Newsom visited the encampment last month, to tout his “all-hands approach to tackle this challenge from every angle.”

Now Newsom is putting (some) money where his mouth is. KTVU reports that Newsom’s administration is giving the city of Oakland a $4.7 million grant to establish a new community housing model at the encampment site, where an estimated 300 people, and a whole lot of debris, currently reside.

The state will allocate $4.7 million to help improve conditions at the Oakland homeless encampment on Wood Street. https://t.co/hECgMxydaX

“We have a lot of abandoned vehicles. It’s really an apocalyptic landscape and some money could be spent removing those,” Alan Lucchesi, owner of the adjacent Soundwave Studios, told KTVU. “I believe money should be spent establishing and enforcing a buffer zone so that businesses and residential properties can operate and function.”

That may or may not be what this new state-funded Wood Street would look like, and details remain vague. “The city wants to build the state-funded community cabin site in partnership with residents and a provider who would offer wraparound services at the site,” according to the Chronicle. “If its model is a success, Oakland could win more state funds to help more Wood Street residents.”

But whatever happens with the $4.7-million grant has to be drawn up and approved by Oakland City Council, so there’s your first big hold-up right there. And even if it’s not intentional, one worries this program is automatically set up to fail.

According to the Chronicle, “The money would fund a new community cabin site or tiny home village at Wood Street for about 50 people.” That’s great, but there are 300-and-counting people living there. Who gets a structure, and who doesn’t? That’s a thorny topic, but if they can manage to implement some safety measures that prevent fires, that alone would make a somewhat successful effort.

Related: Another Person Has Died In an Encampment Fire, This Time In West Oakland [SFist]