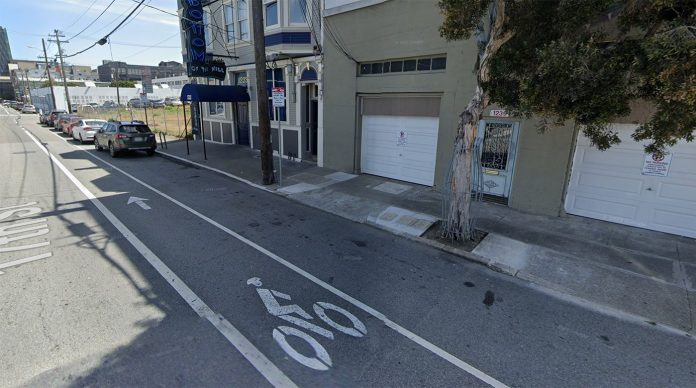 A proposal by the SFMTA to do a bike lane “quick-build” project to create a protected lane for cyclists coming down 17th Street between the Mission and Dogpatch/Mission Bay has raised the hackles of the owners of music venues Bottom of the Hill and Thee Parkside.

“Hey bike safety and bike lanes are wonderful, but this very specific one bike lane could destroy our venue. As in, we will have to close. Not exaggerating in the slightest,” tweeted Bottom of the Hill owner Lynn Schwarz on Wednesday.

Schwarz links to a Change.org petition and encourages supporters of the venue to sign it, explaining that the protected bike lane “could eliminate over half the parking on the street” in a neighborhood where parking is already a challenge. And, she suggests, that bands arriving with vans or trucks at the venue will have to “load in through protected bike lanes, which we feel will be more dangerous, and not safer, for bicycle riders.”

Also, the petition adds, “This neighborhood is a place to bike to not just through.”

“No one opposes bicycle safety,” Schwarz writes. “On the contrary, many signers are bicycle riders. The problem is that the plans do not address the real-world concerns shared by the stakeholders. Alternatives should be debated, and concerns considered.”

Hey bike safety and bike lanes are wonderful, but this very specific one bike lane could destroy our venue. As in, we will have to close. Not exaggerating in the slightest. Please sign and share, and thanks for all your support!https://t.co/x2Yx03OSbb

It does seem as though the SFMTA is still gathering input on the project — the agency’s webpage for the 17th Street Quick-Build project says that it is still in the “initial outreach, planning, and analysis” phase of the project and the public review process won’t begin until fall, with installation slated for next spring.

Schwarz and other businesses in the area have launched a website and mailing list called Save 17th Street, and the concern seems to be that the businesses like Bottom of the Hill won’t get a significant enough say in how the project takes shape.

“We wish we knew what the exact plans are—there are a lot of variations we’ve seen, none of which address our concerns,” the petition says. “The problem is, once the plans are created and approved by the SFMTA, it could be too late to oppose because of the nature of the Vision Zero Quick-Builds.”

The petition also points out that there are already double bike lanes — one on each side, uphill and downhill — on 17th Street (see image above), but cycling advocates argue they are unsafe and too frequently blocked.

Streetsblog also quotes a neighbor of the venue who’s a cycling advocate, Cliff Barger, who sent in a photo of a car blocking the bike lane outside Bottom of the Hill. “The amount of blocked bike lane on 17th – it’s a big deterrent from cycling.” Barger says.

It’s not clear what the alternative would be for bands loading in and out of a music venue — maybe its an area where the bike lane barricades end and there’s a delivery-only area to pull into that doesn’t block the bike lane.

But in any event, expect this fight to potentially get louder in the coming months.