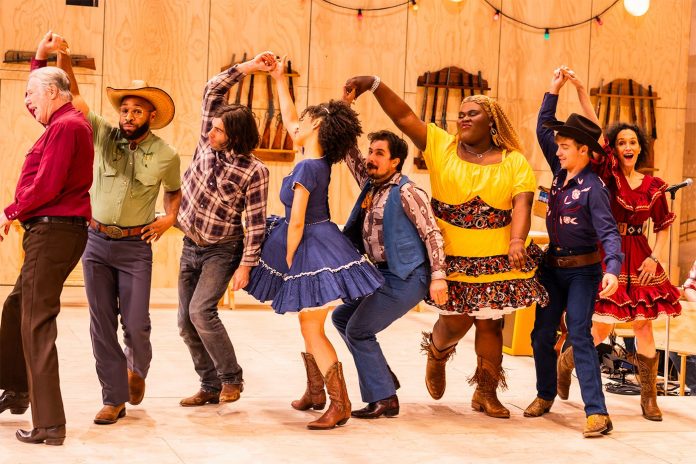 The Tony Award-winning revival production of Rodgers and Hammerstein’s Oklahoma! opened this week in its tour stop at San Francisco’s Golden Gate Theater, and while almost entirely loyal to the original text it exists worlds away from the 1943 musical that begat it.

Directed by Daniel Fish, who presented a radically reimagined production of The Merchant of Venice at Cal Shakes in 2006, this Oklahoma! bears only the slightest resemblance to the grand, hokey if lyrical piece of Americana that Richard Rodgers and Oscar Hammerstein created eighty years back — itself an adaption of an earlier play about life in the Oklahoma Indian Territory called Green Grow the Lilacs. The production is set in a brightly lit community hall filled with unfinished wood picnic tables piled with cans of Bud Light and corn cobs, the walls somewhat ominously lined with two dozen gun racks holding around 100 rifles. (The design by Laura Jellinek melds well with Fish’s vision.)

We know from the outset that guns will go off in this production, with a house manager making an announcement before the show that all the guns on stage are prop guns that are not capable of firing live rounds. And several of them do, to great and unsettling dramatic effect.

Fish’s vision of Oklahoma!, with naturalistic acting, stripped-down musical numbers, and brilliant use of simulcast videography projection — something he also employed in that meta version of Merchant of Venice — honors the mostly terrific music in the show while undercutting much of the triteness in the original book. And while this isn’t the first restaging of the show to point out the uncomfortable — and often disturbing — gender dynamics in the script as written (the NY Times critic Ben Brantley points out that a 2002 revival directed by Trevor Nunn made similar gestures), it is likely the first to turn much of the original’s meaning on its head.

Songs like “Oh What a Beautiful Mornin'” and “The Surrey With the Fringe on Top” become much more plaintive, folksy numbers in the hands of Sean Grandillo as Curly — sung as he strums his guitar and wanders the stage. The big orchestrations are traded in for a small band that includes a fiddle, a banjo, and a couple electric guitars.

And the closing wedding scene, which I won’t spoil here, has been retooled as something darker than dark, with a final, nearly screaming reprise of the title song serving as a haunting exclamation mark before the lights go to black.

While the promiscuous and lovelorn Ado Annie was played by an actor in a wheelchair on Broadway (Ali Stoker, in a Tony-winning turn), this production features a Black trans actor in the role, Sis, who previously appeared on FX’s Pose and who is a commanding presence on stage with a stellar voice when she gets to do her solo “I Can’t Say No.” And Annie’s dual romances with the dimwitted Will (Hennessy Winkler) and the peddler Ali Hakim (Benj Mirman) serve as the amusing subplot to the character Laurey’s (played here brilliantly by Sasha Hutchings who understudied the role on Broadway and who also has stellar vocal chops), who is similarly torn between two suitors throughout the show.

The tension between those men — the affable, handsome, guitar-playing cowboy Curly, and the brooding, apparently damaged Jud (Christopher Bannow) — becomes the driving plot element of the show, bringing it to its highly dramatic stunner of an ending. As Aunt Eller, Broadway vet Barbara Walsh provides a stabilizing presence, though even she seems like a flawed and not entirely sympathetic force by the end.

The song “Pore Jud Is Daid,” which seems like a cruel enough joke of a song in the original show and movie with Curly singing about Jud eventually dying and no one caring very much about him, becomes something far more fraught in this version. Sung in darkness, with the two actors face to face — nearly at kissing distance by the end — in the center of the stage with their close-up faces projected via night-vision simulcast on the back wall of the proscenium, the song is both a threat of violence and maybe something sexual too. All we know is that by the end, Jud is legitimately in tears.

The lights go off a few more times in Fish’s rendering of Oklahoma!, including in his reimagined dream ballet — a midcentury convolution that originally closed out Act 1 but here begins Act 2, performed with frenetic, angry energy by dancer Jordan Wynn, wearing a sequined top bearing the words “Dream Baby Dream.” And the overall effect, both in these lighting choices and in the production overall, is to highlight every word of the original text, and make us hear all of its problems, societal, sexual, and otherwise, in stark relief.

Much as directors often choose to do with older texts like Shakespeare plays, Fish is telling us with this show that we can and should still have dialogues with the canonized icons of our cultural past. There’s a lot to distill and learn from in this story, which you might have otherwise written off an outdated bit of pablum with a couple of catchy numbers your grandparents used to sing. And your grandparents, or great-grandparents for that matter, wouldn’t recognize this show if they had the chance to see it, and that’s a very good thing.

‘Oklahoma!’ is playing at the Golden Gate Theater through September 11. Find tickets here.

Facebook
Twitter
Pinterest
WhatsApp
Previous articleDalva’s Bar-Within-a-Bar, The Hideout, Swings Back Open For the First Time In 2.5 Years
Next articleDid You Know There Was an Internment Camp For Suspected Japanese Spies During WWII on San Francisco Property?