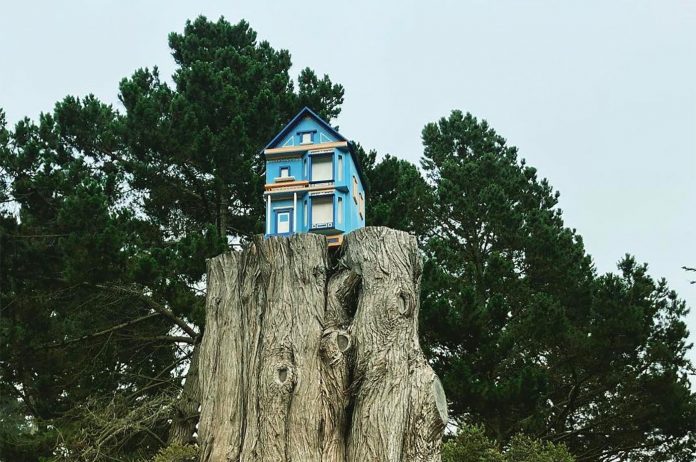 Someone put a cute little blue house on a tall tree stump in Golden Gate Park, and it’s becoming a mini attraction.

It doesn’t really need explanation — does it? But a miniature house appeared atop a 30-foot-high tree stump about six weeks ago, near the entrance to the park at 19th Avenue and Lincoln Way. And as KTVU reports, Rec & Parks Manager Phil Ginsburg told staff to leave it alone.

What did I miss? Who can explain this miniature house on top of a tall stump in Golden Gate Park? pic.twitter.com/wtBk5qSmeB

When I saw reports on social media today about a miniature Victorian house being placed on a tall tree stump in Golden Gate Park, I had to see it… 🏡 #goldengatepark #miniaturehouse #victorianhouse #sanfrancisco pic.twitter.com/uId76gAluR

A tiny little house that mysteriously appeared in Golden Gate Park has people scratching their heads as to how it got there. https://t.co/KMZyIQG7JH