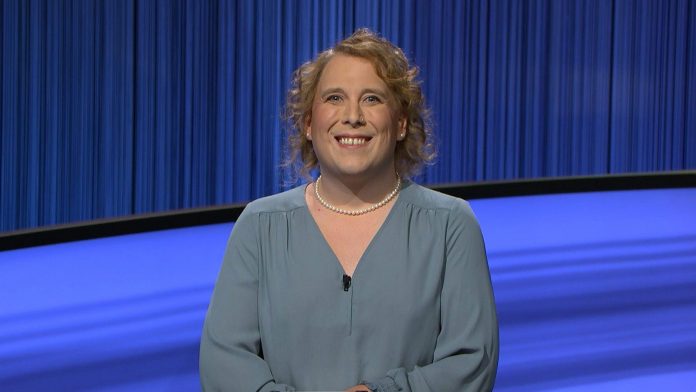 The Bay Area Book Festival scored a pretty big get with 40-time Jeopardy! champion Amy Schneider hosting a Literary Pub Trivia night Tuesday, and there’s still time for you to register to compete.

If you sometimes spend your Tuesday evening engaged in trivia night at some Bay Area watering hole, you might want to rearrange your Tuesday schedule for this one. Out El Cerrito way, in the city of Albany, KTVU reports that a little tavern on San Pablo Way called the Ivy Room will welcome Jeopardy! champion Amy Schneider to host a Literary Pub Trivia night, organized by the Bay Area Book Fair.

Since it’s a Bay Area Book Festival event, the topic of the trivia will be literature and literary figures. “Which novelist wrote a manuscript entirely in crayon? Who typed all Tolstoy’s books for him? If questions like these make your hand itch for a buzzer, you’ll love the Bay Area Book Festival’s first-ever Literary Pub Trivia night,” according to an announcement from the book fair. “Assemble your bookworm teams (six people max) and join us Tuesday, August 9, 7-10 pm, at the Ivy Room at 860 San Pablo Avenue in Albany, for a chance to showcase all your accrued literary knowledge the way it was meant to be shared: with drinks!”

Room for just two more teams at tomorrow's Literary Trivia fundraiser with Amy Schneider – don't miss your chance to play! No tix at the door so buy yours now at the link below (6 people max per team, 21+ only) and let the literary games begin!https://t.co/LZ8Y8Hz4gT… pic.twitter.com/IRsTIEu3f0

According to a 12:30 p.m. Monday afternoon tweet from the book fest, there was “Room for just two more teams” to participate. Teams are six members each (and there will be prizes, so come up with a good name). Tickets are not being sold at the door, so you’ll have to buy your $25 tickets in advance.

Yes, Amy Schneider has been hobnobbing at the White House, giving speeches at the Commonwealth Club, and throwing out first pitches at ballgames since her historic Jeopardy! run in November, December, and January. But she’s also making a point to do local appearances, with a spot at Charlie Jane Anders’ Writers With Drinks earlier this summer at San Francisco’s Make-Out Room.