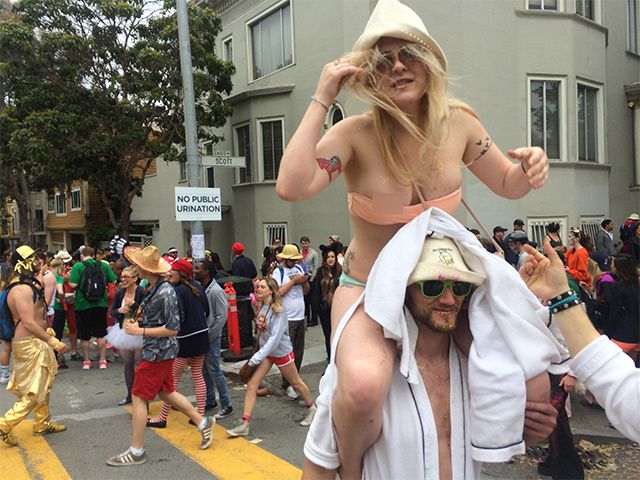 A Brief History and Fun Facts About Bay to Breakers, a.k.a. Straight Pride, a.k.a SF’s Oldest Footrace

It’s Bay to Breakers again this weekend, and it’s the first Bay to Breakers in three years thanks to a stupid plague that hasn’t quite left us. But now that nearly everyone has had COVID, it’s time to don some silly costumes and drink your way across the city with your friends at 8 a.m. on a Sunday.

First, a little history. Bay to Breakers dates back to 1912, six years after the devastating Great Earthquake and fire that destroyed much of San Francisco in April 1906. Much as the 1915 Pan Pacific International Exposition was cast as the city’s grand re-birth party, the 7.5-mile footrace initially called the Cross City Race was meant as a precursor athletic event to the exposition and a way to lift the city’s spirits as it continued to rebuild and began to thrive again. The first first-place finisher of the race was Robert Jackson “Bobby” Vlught, a student at St. Mary’s College in Moraga.

It was not always a full-on, costumed boozefest. The race was launched as an actual athletic competition, with 186 starters and 121 finishers, and to this day it does still attract actual, world-class runners who are actually trying to win. (For the last 30 years it’s mostly been Kenyans winning the men’s division, though 2019’s winner was Gabriel Geay of Tanzania, who crossed the city in 35 minutes and one second.) It’s hard to say when, exactly, the race took on its kookier qualities, and a reputation for being more of a frat party walk-a-thon and excuse for very early day-drinking than a race. But the 1970s are a good timeframe to pin it on, and we know that 1978 is when UC Davis runner Douglas L. Peck helped establish the “centipede” division of the race, specifically for groups of 13 to 15 runners attached by bungee-cord or other cord, running in tandem. (According to the official rules, “The final segment of each centipede must wear a stinger of appropriate design and toxicity.”) And 1986 was the year that the race set a Guinness Book record for its size: 110,000 participants.

Costumes have been a major thing at the race for at least 40 years. “San Francisco, a city which revels in its eccentricities and its ability to laugh at itself, was an appropriate host for this hugging Carnivale on feet,” wrote the Christian Science Monitor, covering the 1985 running of Bay to Breakers. That year, the 74th running, had an “estimated 85,000 official and unofficial entrants,” and featured “a flock of flamingoes; two huge green tennis shoes; and dozens of wandering silicon chips,” as well as an estimated 40 pairs of runners dressed as The Blues Brothers. (Much like Halloween, Bay to Breakers has always been a moment to glimpse the cultural zeitgeist — case in point, there were many Elizabeth Holmeses running/walking the 2019 race.)

There’s typically plenty of nudity. Up until former SF Supervisor turned State Senator Scott Wiener rained on the nudity parade with his 2012 nudity-banning ordinance, San Francisco was known as a place where people could get naked in public with no fear of judgment or prosecution. We still have our nudists of course, primarily in and around the Castro — the ordinance simply says they have to make a gesture of modesty with a flap over their junk, and put down a towel if they sit anywhere. And they come out for Bay to Breakers, especially if the weather is nice, and occasionally hot people take their clothes off too. Noted local nudist activist turned convicted teen-stalker Gypsy Taub tested the limits of the nudity ban at B2B 2014, and got a citation — even though the law specifically makes exceptions for Bay to Breakers and Folsom Street Fair.

SFist played a role in Bay to Breakers becoming even boozier. SFist’s own Joe Kukura began publishing a Bay to Breakers Liquor Locator Store map — a handy guide to the closest corner stores and beer purveyors to the race route — on this website in 2008. (The latest will be arriving on Thursday, May 12, so racers can plan ahead.) And that year, Chronicle columnists Matier & Ross called us out as contributing to the increasing mayhem of the race.

There used to be floats, back before the fun police stepped in. By the time SFist started covering Bay to Breakers in the early aughts, the race had morphed fully into the shitfaced bro-fest we know today, only it was more chaotic in terms of the drinking. A tradition arose wherein people brought floats along for the race, and these floats (one year there was a full Tiki bar) frequently became ersatz keg cozies, allowing people to basically put kegs on wheels and drink a whole lot of beer until they hit Hayes Hill and decided to abandon the keg or just park it in Alamo Square Park and drink. Floats were outlawed at the race starting with the 100th running in 2011, as was drinking (technically), after ING dropped out as a sponsor following the chaotic 2010 race. Organizers further made a gesture toward respectability by saying they were cracking down that year on unregistered runners entering the race after the starting gate. But given that you can’t exactly police all seven miles of the course, this is hard to enforce, and people still do this.

There is typically rampant public urination. Organizers have tried over the years to make sure there were adequate porta-potty stops on the course. Madrone Art Bar on Divisadero once even welcomed racers to come in and use their toilets. But the urination in doorways, in bushes in the Panhandle, and on the sides of buildings, still tends to occur, especially around the middle of the course after people have been going at it for a couple hours. (Former KRON4 guy Stanley Roberts, who’s lately back in the Bay Area, used to do a regular segment called “People Behaving Badly” which would always cover Bay to Breakers shenanigans, including the peeing.) Maybe the younger generation running this race in 2022 is more put together and polite than their forebears? Maybe not!

Historically, the race has also been known for tragedy and occasional crimes. Remember the 2012 Bay to Breakers murder case? 31-year-old Steven Martin, who came with friends to the race dressed as shirtless Troll dolls with colored wigs, was attacked by a group of men in Niners jerseys after finishing the race near Ocean Beach. He ended up in a coma and then was taken off life support, and as far as we know the case has remained unsolved. Also in 2012, a 21-year-old man who was tripping on acid allegedly ripped some hair off a woman’s head and spat at a police officer. In 2013, a man attending a rooftop Bay to Breakers party along Fell Street fell off the roof to his death. And also in 2013, a 27-year-old man, Beau Rasmussen, disappeared shortly after completing the race and his body was never found. (His wallet and cellphone were found on the beach, and his family believes he jumped in the ocean as part of a post-race tradition and drowned.)

Some people dress as salmon and run the race “upstream.” If you so choose, you can be a weirdo, get a salmon costume, and start your race at the ocean, and run it the other direction.

Zappos, the current lead sponsor, has been a good sport. Yes, young Millennials and Gen Zers don’t seem to like to drink as much as the rest of San Francisco traditionally has, so maybe that has contributed to the race being a bit more tame the last couple of times it was run? But now that we’re in the Roaring 20s 2.0, that could change! According to the race website copy, “Each year the race is a glorious celebration of the human spirit – a giant wave of athleticism, fun, frivolity, and determination flowing across the City from the Bay to the Pacific Ocean.” That and a lot of beer-induced peeing!

If you are running/walking the race, or just spectating/jumping in for a mile or so, be safe out there!! And wear sunscreen. (Though it’s going to be partly cloudy Sunday and the high is forecast to be 63 degrees.)

You can still register for Bay to Breakers, and it will cost you $80.