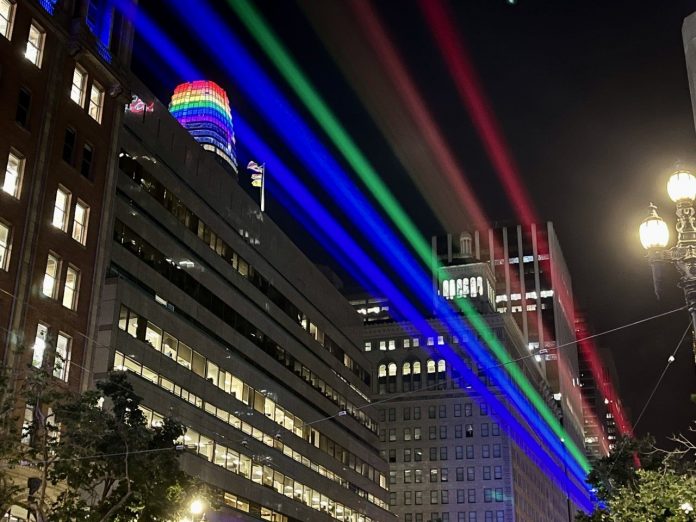 Just in time for SF Pride weekend, WELCOME by Illuminate, which Peak Design sponsored, debuted last night around 9:30 p.m. at the Ferry Building, beaming a 4.1-mile-long bright rainbow — courtesy of an array of six laser beams — down Market Street toward Twin Peaks.

Pride in San Francisco is becoming a increadly bright showcase… quite literally. For the third time, the Illuminate-organized Pink Triangle is currently fixed on a hillside at Twin Peaks. City Hall continues to oscilate with various displays of glowing queer soliadary. SFO beams with all the colors of the rainbow come this time of year; Salesforce Tower is now striped with Pride colors. Adding to our hyperlocal list of LGBTQIA+ public light artworks is WELCOME—and it’s vying to become the most awe-inspiring in the city.

Tonight, and for the next three nights of Pride here in San Francisco, a 4.1-mile-long rainbow made of laser light will beam horizontally from the San Francisco Ferry Building up Market Street towards Twin Peaks.

This installation is called WELCOME. (1/7) pic.twitter.com/ZeslfRwCVs

As The San Francisco Standard noted, the light display was put together at an impressive pace by Illuminate. The showcase further cements the notion that San Francisco has remained a focal point and ubiquitous symbol for securing and pushing LGBTQIA+ rights across not only the country, but world.

The piece, itself, measures about 49 feet wide and utilizes high-powered laser beams capable of shooting light miles away; in this specific case, the six lasers used — each designed to shine a Pride-themed rainbow color — can project a 4.1-mile-long beacon of queer solidary from the Ferry building and down Market Street; each of the beams is aimed at a 3-degree angle, so they could reach above Twin Peaks in the distance.

Rainbow laser beams and I go together nicely #welcomeSF 🌈 pic.twitter.com/5OXC0dNTMK

While the scope of the project might seem gargantuan, Peak Design made sure the display was “really simple” to install.

“He made it really simple, to where you just had to plug it into a [110-volt outlet],” said Debra Walker — a lesbian artist and now nominee for the Police Commission — to the Standard, noting how easy it was to install. “It was like a coffeepot. It didn’t need anything special.”

We talked to someone from Peak Design tonight (in this photo). We enjoyed the installation very much! 🌈✨ pic.twitter.com/wWUqHzQ05j

According to KRON4, Peak Design Founder Peter Dering wanted to create a visual representation for the community to enjoy and visually document this type of art piece.

“San Francisco has always been our home,” Dering tells the news outlet. “And we’re proud to celebrate the LGBTQ community and remind the world what SF stands for: Love and inclusion.”

WELCOME will run the remainder of Pride Weekend from 9:30 p.m. to midnight.