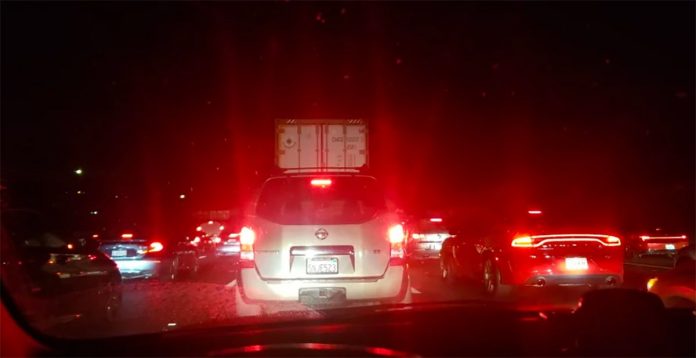 An Overturned Tractor Trailer Shut Down I-80 Monday Night, Caused Hours of Traffic

Westbound I-80 is back open Tuesday morning after an overturned tractor trailer shut down all lanes near San Pablo Monday night for over an hour.

The accident happened around 7:30 p.m. Monday in the westbound lane of the interstate, near El Portal Drive, but subsequently all the westbound lanes were blocked. The roadway remained partly closed late into the night — and CBS News reported that the Sig Alert was not lifted for the area until 11:54 p.m. Monday.

A Redditor posted this photo of the traffic, writing, “‘I’ll leave after 10pm to avoid traffic. That’ll be a good idea’ I said. All lanes closed San Pablo 880S [sic]. Yay!” (It was actually 80 westbound, and 880 is nowhere near San Pablo.)

The California Highway Patrol told the Chronicle that the accident happened when the driver swerved in an attempt to avoid something in the road. The CHP did not mention what the debris that led to the crash may have been.

☄ All too common, truck accidents can be particularly dangerous. For those wounded in such a collision, retaining the services of one of the best truck accident injury attorneys in San Francisco may help guarantee that the costs of your injuries are covered by the proper individuals or corporations. ☄

The CHP tells SFist it was a Harmon Trucking tractor trailer that overturned. The truck was reportedly hauling 75,000 pounds of lumber, which remained in the trailer rather than scattering out into the road.

The truck flipped to its left side, but the driver was able to climb out and was not badly hurt, the CHP says.

It’s unclear how long it took to reopen more than one lane following the crash, or when traffic ultimately let up — but if you know this part of I-80, it’s probably still trafficky!  SFist has reached out to the CHP for more information.