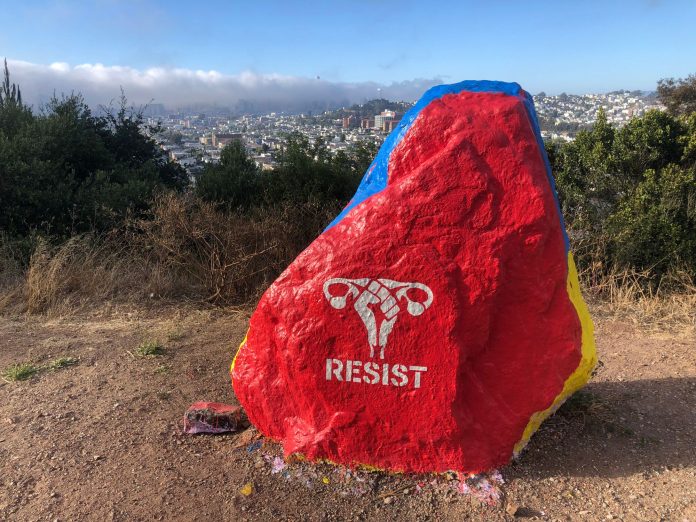 The latest paint job to the beloved boulder at the base of Bernal Heights Park is a message of abortion rights determination and resistance, as women’s liberties feel like they’re hitting rock-bottom in the wake of the recent Supreme Court decision.

The inanimate boulder sitting near the top of Bernal Hill has served as the unofficial barometer of San Francisco political sentiment for the better part of the last ten years. The rock, and its accompanying political messaging, have gone through some challenging periods during that time. But nevertheless, she persisted.

Now, in the wake Roe v. Wade being overturned by the Trump-packed ultraconservative Supreme Court, the rock bears a message that might bring Justice Brett Kavanaugh to the verge of tears again. Bernal Rock’s new paint job shows a set of ovaries, a raised fist, and an inspirational call in dark times to “Resist.”

LWVSF President @alisonhgoh met up with long-time League member and Bernal Heights resident @girardinl to check out the new paint job on Bernal Rock that inspires us all to fight back against the @USSupremeCourt overturn of Roe v. Wade. #WeWontGoBack pic.twitter.com/uBQFWxWEAG

Despite the above tweet, it does not appear that the League of Women Voters of San Francisco is directly responsible for the “Resist” paint job on Bernal Rock. But the Facebook post below seems to indicate who’s behind this particular act of resistance.

It’s a fairly simple message as far as Bernal Rock paint jobs go. The “Resist” messaging is on the park-facing side of the rock, the rest of the rock is mostly solid colors of red, blue, and yellow. It replaced the Prince birthday homage that was applied to the rock in early June.

One could argue that the Bernal Hill Rock is doing more for abortion rights than President Biden. In fairness, Biden did sign an executive order Friday that to some degree protects medication abortion and contraception, and on Monday declared that federal law preempts state abortion bans in emergency care cases.

But these strategies still feel like a Sisyphean task — that is, pushing a boulder up a hill just to see it roll down again.