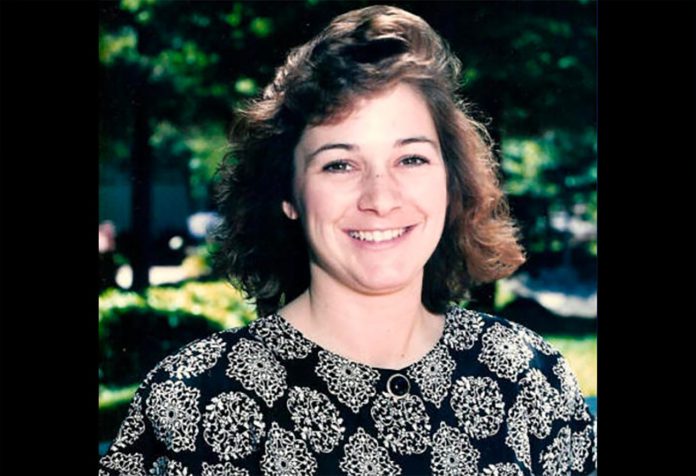 A 1992 cold case in which a 25-year-old woman was strangled to death in Mountain View has now led to a re-arrest of a prime suspect who was already tried twice for the crime, and the suspect is a Bay Area tech CEO who has been living abroad.

John Kevin Woodward, 58, the President and CEO of ReadyTech — a training software company which lists its headquarters in Oakland — was arrested at JFK Airport in New York on Saturday. His arrest came after being arrested and extradited by Dutch authorities in Amsterdam, where he’s been living. Mountain View police announced the arrest in a press release, saying that Woodward was in custody in New York and would soon be extradited to California.

Houts was found dead of strangulation in her car about a mile from where she worked at Adobe Systems on September 5, 1992. As KPIX reports, the rope used to strangle her was still around her neck, and “footprints were visible on the interior of the car’s windshield,” which was evidence of the struggle that occurred.

Woodward was quickly identified as a suspect, and authorities learned that he was known to be jealous of Houts because he had romantic feelings of his own for his then roommate. When he was asked by his roommate in a phone call that was monitored by police if he killed Houts, Woodward immediately asked how much investigators knew.

Woodward was tried twice for the crime in the 1990s, but both trials ended in hung juries. New evidence, thanks to advances in DNA technology, emerged when investigators reopened the case two years ago — including, reportedly, Woodward’s DNA on the rope used to kill Houts. Additionally, investigators say that latent fingerprints have been reexamined which point to Woodward’s guilt, as well.

After the second trial, Woodward relocated to the Netherlands, though his company remained headquartered in the Bay Area.

“This case is the culmination of incredible determination by our detectives over the decades and with phenomenal teamwork with our agency partners here in Santa Clara County and in New York,” said Mountain View Police Chief Chris Hsiung in the press release. “I am honored that our agency finally gets to give hope to Laurie’s family that they can see a successful prosecution carried out. It bears repeating – we do not give up on justice for victims, no matter what.”

Houts, who was an engineer and early pioneer in the STEM fields, was also an avid athlete, and family members established a memorial athletic scholarship in her name. They are asking for people to make donations to the scholarship fund in Houts’s memory.

Her family put out a statement following Woodward’s re-arrest, saying, in part, “Although she was only 5 [feet] tall, she had a huge heart and her humor and spunk were endearing to all. The way Laurie lived and treated people was a stunning example of what was right in the world. She was a gem to so many, but her bright life was taken from us at the age of 25. We are hopeful that justice can finally be served for Laurie and incredibly appreciative of the law enforcement agencies who have never given up on her.”