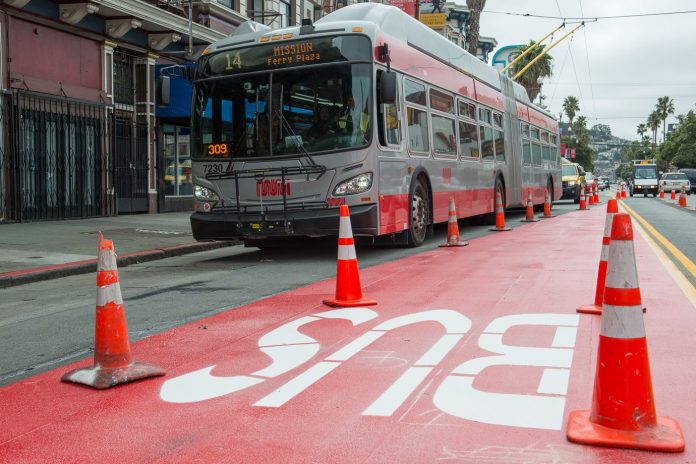 The same concept from “the mess on Van Ness” is being applied to 16th Street, and is expected to take more than a year to complete, but in this case at least Phase 1 of the project was pretty much completed on time.

The red paint is barely dry on the Van Ness BRT construction project that tore up the street for six ever-loving years, snarled traffic, and made life hell for businesses on the corridor. And we’re about to do this again? We are, this time on 16th Street, as the Examiner reports that construction begins Monday, May 9 on Phase 2 of the 16th Street Improvement Project.

On May 9, construction crews will break ground on the second phase of the 16th St. Improvement Project, adding bus-only lanes and other transit improvements between Church Street and Potrero Avenue. https://t.co/6zO0zWgeff

So what’s the timeline, and how likely is it that completion will go well past its deadlines? As seen above in power blue (we are on Phase 2 now), the start of construction was supposed to be last month. That start is delayed by a month, but that’s not a huge deal, right? What is huge is that 16th Street will remain under construction until “Summer 2023,” more than a year from now, and it may be ominous that they don’t even take a stab at approximating which month of “Summer 2023” they expect to finish tearing up 16th Street and putting it back together.

As seen above (and there is an inreactive map here), you can expect to find things torn up all along 16th Street, between Church Street and Third Street, plus a bit of Third Street itself, and a block of Gene Friend Way. It will probably be phased, so some neighborhoods and businesses will feel the pain at likely different times.

Also, this project doesn’t involve moving lampposts and rerouting century-old plumbing and electrical piping, as the SFMTA found out late they needed to do on Van Ness.

One on hand, you can say that unlike Van Ness, this project has already delivered on-time results. There was a Phase 1 from Potrero Avenue to Third Street, which was completed on schedule in August 2020. On the other hand, SFMTA said in their completion announcement on Phase 1 that “The second phase of the project from Church to Potrero will be delivered through a separate construction project and is anticipated to begin work in early 2021.”

So wait, they are not starting just one month behind schedule, they’re starting more than a year behind schedule! That seems a red flag for anyone who lives, works, or does business on 16th Street, that the installation of red bus lanes will have you seeing red for quite some time.