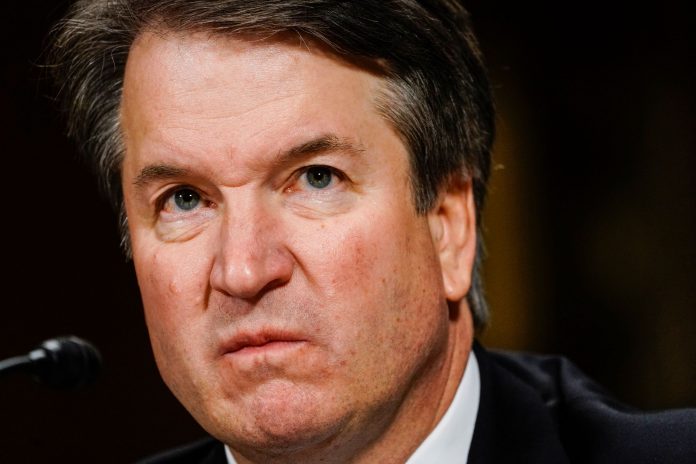 In the days before we expect a Roe v. Wade ruling to come down, an unidentified armed man was arrested near Justice Brett Kavanaugh’s home, and he had reportedly made threats against the Supreme Court justice.

We don’t know a ton yet about this story that’s sure to be a right-wing apocalypse cry, but here’s what we do know: At about 1:50 a.m. Wednesday morning, a man who is reportedly from California and was armed with we-don’t-know-what-yet was arrested ”near” Supreme Court Justice Brett Kavanaugh’s home in Chevy Chase, Maryland, according to the New York Times. And he had reportedly been making unspecified threats toward Kavanaugh. That information comes form Supreme Court spokesperson Patricia McCabe, and additionally the U.S. Marshals Service and Montgomery County police acknowledge they arrested a suspect without incident.

CNN adds that “there has been a rise in threats against the court” since that leaked opinion overturning Roe v. Wade became public last month, and that  “The Department of Homeland Security issued a memo last month warning law enforcement that there are potential threats to members of the Supreme Court.”

The court was expected to issue rulings today (they did yesterday) but this obviously might change that. According to CNN, “The court did not respond to a question if Kavanaugh was at the building Wednesday morning.” The Supreme Court building has been closed to the public throughout the whole pandemic, and Washington, D.C. in general has been more fenced up and on higher alert since the whole “Hang Mike Pence!” thing.

There have been a few protests outside Supreme Court justice’s homes in the last month, and Maryland Governor Larry Hogan is calling for increased security outside those particular households. “I call on leaders in both parties in Washington to strongly condemn these actions in no uncertain terms,” Hogan said in a statement. “It is vital to our constitutional system that the justices be able to carry out their duties without fear of violence against them and their families.”

Senate Minority Leader Mitch McConnell called on the House to immediately pass his bill for increased police protection of justices’ homes, a bill that has already passed the Senate. “No more fiddling around with this,” Mr. McConnell said on the Senate floor Wednesday, per the New York Times. “Pass it before the sun sets today.”

That urgency might amuse Attorney General Merrick Garland, whose Supreme Court nomination McConnell sat on for nearly a year.

Right now this story has more political hot-potato value than factual content, though we’ll surely learn more in the days to come. But you can see how conservatives are seizing on this as perhaps one of the greatest crime in American history, while simultaneously claiming that actual mass shootings are merely false flag hoaxes.

Image: Kavanaugh as nominee at a Senate Judiciary Committee hearing on September 27, 2018 in Washington, DC. (Photo by Melina Mara-Pool/Getty Images)