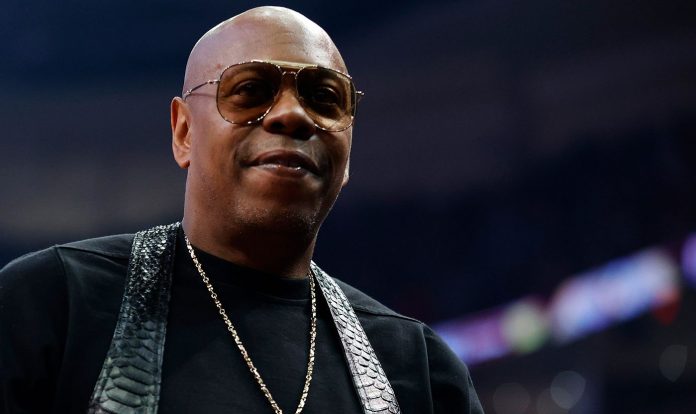 Dave Chappelle, who dug in his heels with his transphobia in his last Netflix special and forced the company to admit they needed his audience more than they cared about the social impacts of it all, was talking onstage Tuesday at the Hollywood Bowl about how he needs extra security now that the LGBTQ community despises him. And then a guy rushed the stage in an apparent attempt to physically assault or harm him.

Chappelle was performing Tuesday at the Hollywood Bowl as part of the 11-day Netflix Is a Joke comedy festival in L.A. — which is ongoing through Sunday, May 8, and is sponsored by Netflix. Over 100 comedians are taking part and doing shows at over two dozen venues around the city, and obviously Chappelle was one of the bigger draws playing one of the bigger venues.

As BuzzFeed tells it, the incident occurred after Chappelle had finished his set, but he was back onstage promoting his new podcast with Talib Kweli and Mos Def. A man rushed the stage and tackled Chappelle to the ground, carrying what police say was a replica gun that could eject a knife blade.

The attacker was then jumped on by at least 10 security personnel, and BuzzFeed reporter Brianna Sacks who was at the show says the security guys “were beating the attacker up like a free-for-all,” and at one point Chappelle, back on stage, called the guy an “idiot” and went on talking on the mic while the guy was being beaten at the back of the stage.

Chappelle also joked, “Was that Will Smith?”

Chris Rock, who got slapped at the Oscars this year by Smith after making a joke about Jada Pinkett Smith’s baldness, was also at the show to support Chappelle, and came back out on stage along with Jamie Foxx. Multiple news outlets have connected this incident to comedian Kathy Griffin’s tweet after the Oscars incident, in which she wrote, “Now we all have to worry about who wants to be the next Will Smith in comedy clubs and theaters.”

Sacks said on Twitter that Chappelle “had literally just said he now has more security because of all the uproar from his jokes about the Trans community.”

Sheer chaos. Then Jamie Fox comes out in a cowboy hat, looking absolutely shocked, and Chapelle makes a joke about stomping the guy, who is still getting beat up. kweli and Mos Def do their set while LAPD cruisers start arriving behind the stage. Fucking wild

BuzzFeed also reported that Chappelle cracked another trans joke after the attack, suggesting that the attacker was a trans man. He also reportedly said, “I’ve been doing this 35 years, I just stomped a n**** backstage, always wanted to do that.”

The bizarre incident comes seven months after Chappelle’s Netflix special, The Closer, was released and caused escalating tensions both within the walls of Netflix, and in the national media, regarding Chappelle’s unapologetic need to mock transness. Chappelle crafted an argument, of a sort, in the set in which he tried to explain away his intolerance by saying that everything comes down to race for him — and the only people trying to “cancel” him are white. He also brought up a friendship he had with a trans woman who was an amateur comedian who ended up taking her own life.

The New York Times columnist Roxane Gay summarized it saying, “This is a faded simulacrum of the once-great comedian, who now uses his significant platform to air grievances against the great many people he holds in contempt, while deftly avoiding any accountability.”

A Black trans employee at Netflix was subsequently fired from the company on the grounds of leaking confidential viewership and budget information to the public. That employee, former program manager B. Pagels-Minor, later explained themselves saying that they were trying expose the huge expense being shelled for Chappelle’s specials, and calling for parity in terms of positive LGBTQ content.