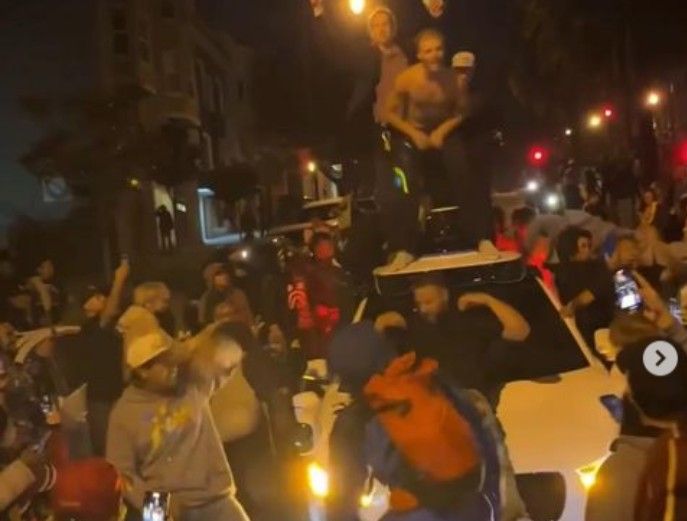 Things really went downhill at the notorious annual Dolores Hill Bomb skater celebration Saturday, and while it appears there were no human injuries, a passing Waymo self-driving car got mobbed, jumped on, and tagged.

If you get mad about all the illegal fireworks going off in San Francisco these days, get ready to Karen yourself sick over this treasury of videos from Saturday’s return of the annual, outlaw Dolores Hill Bomb skater punk bacchanalia. The no-holds-barred, daredevils-barreling-down-Dolores Street skate party has certainly been marred in some years by significant injury, and even a fatality in 2020, plus the requisite confrontations with police.

It does not appear any of that happened this year. But as seen below, one self-driving Alphabet-owned Waymo vehicle was sacrificed to the skater gods during its ill-advised attempt to navigate through the bedlam.

The incident took place after dark. Vice News reports that yes, a Waymo did get trashed at the Dolores Hill Bomb this year. “A group of skateboarders mobbed a Waymo vehicle in San Francisco on Saturday night, jumping on and spraypainting the car,” Vice reports. “In a video of the encounter, dozens of people can be seen swarming the car, several jumping on top of it and dancing, a few drawing on the car, and at least one individual sitting on the large sensor on the roof.”

thread of some photos/videos i took at the mission dolores hill bomb yesterday pic.twitter.com/yqjFlQrpNe

A Waymo spokesperson confirmed the incident in a statement to Vice. “At approximately 10 pm on July 9, one of our cars operating in manual mode in San Francisco was surrounded by individuals who jumped onto the hood, roof and the trunk of the car and vandalized the vehicle with spray paint,” a Waymo spokesperson told Vice’s Motherboard. “The autonomous specialist was eventually able to direct the car safely out of the crowd and remove themselves from the situation. We are in close communication with the San Francisco Police Department as they actively investigate this incident.”

SFist is obliged to officially remain neutral on the merits and morals, or lack thereof, of the annual Dolores Hill Bomb. But on a personal level, I will buy you a drink if you are one of those people who tagged the self-driving Waymo car. But sheesh, we would like to see more helmets being worn at this thing.

As one commenter noted in the 50-comment Reddit thread for this event, “I work at SFGH. We see so many cases of head traumas from skateboarders, and they are DEVESTATING. [sic] Brain bleeds, requiring brain surgery, etc. Heart breaking esp in young adults. Ruins their life and their cognition. WEAR YOUR GOD DAMN HELMETS!!”