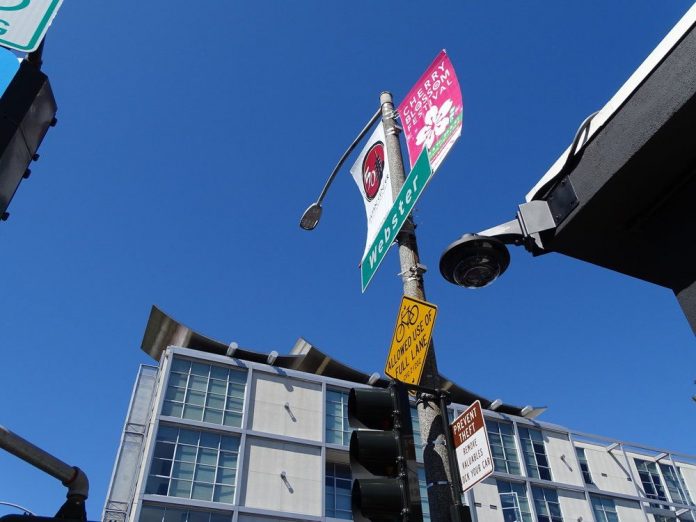 The SFPD could get the power to live-monitor private security cameras all over town, including residential Ring and Nest doorbells, under a contentious new surveillance policy working its way through the Board of Supervisors.

SFist and even San Francisco’s biggest political junkies generally do not pay much attention to Board of Supervisors committee meetings; nothing gets definitively decided at these things, it’s generally just three supervisors, and they just make recommendations on what they’re going to pass on for the full board’s consideration.

The SFPD is trying to sneak by a policy that grants them sweeping live access to THOUSANDS of private cameras, including those on doorbells and businesses.

It would be one of the largest expansions of surveillance in city history.

But there was quite a crowd of public commenters, and leading figures from the ACLU and Electronic Freedom Foundation, at Monday morning’s 10 a.m. Board of Supervisors Rules Committee meeting. The reason?  The committee was considering a measure that would expand SFPD’s access to privately owned security cameras to beyond just situations of imminent death or harm, and as SFGate explains would allow police to access private cameras for “crimes such as retail theft, rioting, looting and drug-dealing.” Heck, that could be any time in this town!

And in an ironic turn that symbolized the somewhat iffy reliability of these technologies, the committee meeting was delayed several times, because the SFGovTV stream kept crapping out.

You’ve seen these security cameras all over town, whether you realized you were looking at them or not. Above we see one of many installed in Japantown, and these are generally maintained and installed by neighborhood Community Benefit Districts (CBDs). There are more than 1,000 of them around town, largely funded by Ripple founder and big-time political donor Chris Larsen. The program claims “there is no live monitoring of the system,” but the proposed legislation would change that, and would allow SFPD to live-monitor them if they feel there is retail theft or drug dealing to be found.

San Franciscans want accountability and reform. This week, I appointed a new District Attorney, but that’s just one part of the work we are doing to make people feel safer and bring change to our city. https://t.co/acANvq4a9x

Mayor Breed came out swinging this weekend in favor of giving SFPD access to the camera feeds (which is not a new development, she’d pushed for a ballot measure to give cops access to the cameras in early 2022). In a Saturday Medium post that mostly explains why she appointed Brooke Jenkins as District Attorney, Breed said, “We also need to make sure our police officers have the proper tools to protect public safety responsibly.”

“The chaos we saw last November in Union Square, the organized drug dealing we see in the Tenderloin and South of Market areas on a daily basis, the robberies that have plagued neighborhood commercial corridors in Chinatown, Hayes Valley, the Marina and Sunset — these are just a few examples where live video could provide a significant tool for our police to be able to conduct investigations and make arrests,” Breed wrote.

Newly appointed DA Brooke Jenkins backs push to expand live police surveillance, says the proposal will "send a message to those scheming to prey on our city that there will be consequences for their actions” https://t.co/FtVkU94DZB

“This policy can help address the existence of open-air drug markets fueling the sale of the deadly drug fentanyl,” she wrote in the letter. “Drug dealers are destroying people’s lives and wreaking havoc on neighborhoods like the Tenderloin.”

But as you see above from the policy proposal, it gives SFPD access to a lot more than just the neighborhood CBD cameras. The proposal includes access to “Smart/Doorbell Cameras: cameras typically affixed to a or inside of a residence.” So yes, SFPD could ostensibly access any Ring or Nest doorbell in town, in case they feel you stumbling home drunk or drugged up at 3 a.m. might constitute “rioting, looting and drug-dealing.”

If you live in San Francisco, you know how many Ring doorbell cameras there are. It’s extremely frightening to think the SFPD want total, unaccountable access to them. This will hurt our most vulnerable.

The issue is not decided. The Rules Committee delayed their recommendation until a hearing next week, after fielding an hour’s worth of public comments concerns about SFPD’s abuses of power with the whole rape kit thing, past surveillance of Black Lives Matter and Pride protests, and concerns over spying on women in a post-Roe v Wade world. So if you have thoughts, you have another week to contact the Rules Committee’s Supervisors Connie Chan, Rafael Mandelman, or Aaron Peskin on the matter.

Related: Billionaire-Backed Security Cameras Everywhere In SF Finally Getting Set of Rules For How They Can Be Used [SFist]