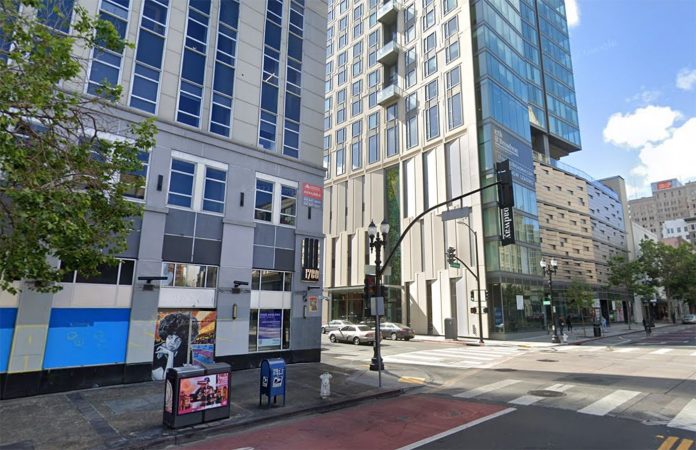 A pair of shootings came after a night of First Friday partying in Oakland’s Uptown District, and one of the shootings, a drive-by on Broadway in the early morning hours of Saturday, left one person dead.

The first shooting happened closer to the city’s downtown just after midnight, at 12:15 a.m. Saturday. Oakland police responded to gunfire on the 1400 block of Webster Street, and they arrived to find a man suffering from gunshot wounds sitting in a vehicle, as KPIX reports.

That victim, a 25-year-old Alameda man, was reportedly in grave condition and suffering life-threatening injuries, and he remains hospitalized.

About three hours later, near 3:15 a.m., a drive-by shooting took place on the 1700 block of Broadway. In that shooting, a 35-year-old Pittsburg man suffered serious injuries and later died at the hospital. Two other victims, a man and a woman both from Berkeley, were also injured in the shooting.

The Pittsburg man, who has not yet been publicly identified, was Oakland’s 71st homicide of the year to date.

The two shootings do not appear to be related, according to police.

The shootings have made nightlife operators in Uptown and Downtown Oakland nervous, as they continue to try to recover after the pandemic decimated their businesses.

Oscar Edwards, owner of Complex on 14th Street, tells KPIX that since the pandemic, he’s seen business drop 75 to 80 percent. “You add violence on top of that, that makes everybody really not want to go out,” Edwards said.

Edwards predicted, after the pair of Saturday shootings, “We’re going to see a decrease in business for weeks to come. Nobody wants to lose their life over trying to have a good night out.”

Club owner Richard Ali, who tells KPIX that one of the weekend’s shootings took place outside one of his venues, says that the biggest problem is the scourge of illegal guns out on the street.

“It affects every business that’s down here, whether it be restaurants, bars, nightclubs, event spaces,” Ali tells the station. “All of us suffer because nobody feels safe coming to Oakland.”

Homicides are slightly down this year in Oakland after a very violent 2021 — the city had seen 77 homicides at this time last year, compared to 71. The majority of these shootings have taken place elsewhere in the city — not generally near downtown — but the last eighteen months have seen a string of fatal shootings on one particular street next to Lake Merritt, and last month a man was fatally shot near the Fox Theater in Oakland’s Uptown while celebrating his birthday.