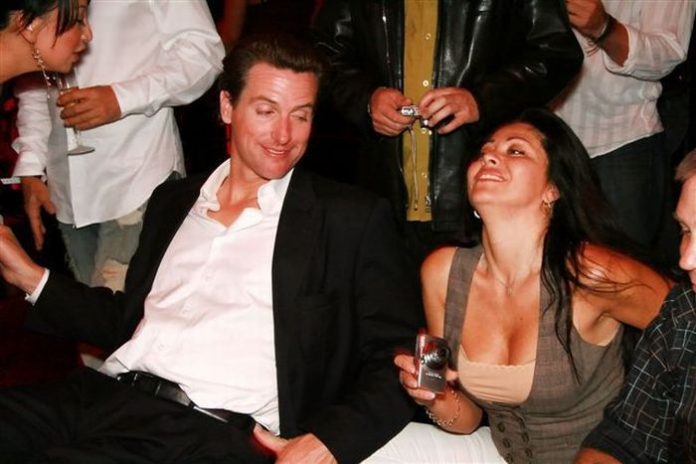 Flashback: The Risqué Gavin Newsom Photo That Stared Down His 2007 SF Mayoral Campaign

It was 15 years ago this week when this image brought scandal onto then-Mayor Gavin Newsom’s reelection campaign. SFist investigates whether the image is even real, and who might have been behind its release.

15 years ago this week, political attack ad mailers arrived in San Francisco mailboxes going after then-San Francisco Mayor Gavin Newsom. But these were not just any political attack ad mailers. These anonymously sent flyers depicted an eye-popping Gavin-staring-at-boobs-dot-jpeg image of Newsom looking down the double-barrel of a woman’s neckline, at a time when his womanizing habits were an object of scrutiny.

This image released this week in 2007 has never been authenticated or verified as real. Nor has anyone ever taken credit for snapping the photograph. But it has lived on in right-wing attacks and left wing attacks on Newsom in the years since, despite its unreliable countenance. And who knows, it may rear its headlights again should Newsom ever run for higher office.

That still photo was part of a larger flyer sent to households all over town (and a poorly designed one, at that) declaring “FRESH OUT OF REHAB” and ”NEWLY SINGLE & READY TO SERVICE.” It listed the names of then-popular websites GavinWatch.com and GavinSucks.com, though both of those sites strongly denied any involvement when asked by SFist at the time.

SFist was the first local news publication to pick up on the flyer, though it had already been published on various Blogspot accounts, and on popular message boards of the day like Junto and SFWall. The flyer also says “call jim” and “/call eric” [sic]. When the Chronicle’s Matier & Ross picked up the story a month later, they noted that “The cards advise recipients to phone either ‘Eric’ or ‘Jim’ at two listed phone numbers – one belonging to the office of Newsom’s campaign manager, Eric Jaye, and the other to the office of Jim Sutton, the mayor’s campaign finance lawyer.”

Neither Jaye nor Sutton responded to SFist’s requests for comment in this article. But we did hear back from Jim Ross, who managed Newsom’s original 2003 mayoral campaign, and knows well the challenges posed by the, erm, “externalities” that Newsom’s off-court personal life posed for a political campaign.

Ross tells SFist that he “spent a good chunk of his life” at the time “trying to make sure photos like the Getty mansion one, that type of thing, didn’t happen.”

That Getty mansion photo he refers to is seen below, and appeared in a September 2004 issue of Harper’s Bazaar. It gives you a sense of the Newsom’s mid-2000s playboy persona that came to a head in 2007.

I am once again thinking about this photo of Gavin Newsom and Kimberly Guilfoyle from their Vanity Fair photoshoot pic.twitter.com/rT17ShmmnV

Yet just one week before, Newsom’s campaign was reeling from a separate scandal. SFist discovered that Newsom’s press secretary Peter Ragone had been posting sock puppet comments in the SFist comments section under someone else’s name, a scandal came to be known as SFistGate.

But back to the sexy stuff! In the months following Newsom’s 2006 divorce from Kimberly Guilfoyle (yes, her), SFist had developed an obsession with Newsom’s very complicated dating life. We even ran regularly updated power rankings of how main or not-main each squeeze was on any given week. This was a different era!

There was Scientology-adjacent CSI: Miami star Sofia Milos, reality TV personality Erin Brodie, the clearly underage but still alcohol drinking Brittanie Mountz, and the eventual winner of the Bachelor Gavin sweepstakes Jen Siebel. And as he cycled through, them it was an article of faith among SFist commenters (or at least those who were not Peter Ragone posting under someone else’s name) the Newsom was doing a little cocaine here and there.

“I think he was kind of struggling with a lot of different things,” Ross tells us. “A divorce, the breakup of his marriage. The thing that people don’t realize his mom passed away in 2002, just weeks before he really started running for mayor.”

“There’s a lot of things he had to process at that time,” Ross adds. “He was kind of having that struggling that I think a lot of people go through when a marriage dissolves, and they’re kind of at loose ends with their personal life.”

Newsom did seek treatment for alcohol abuse the week after the Tourk scandal broke. But as many commenters alleged, and was eventually confirmed by the Sacramento Bee in 2018, Newsom did not really go into rehab, and resumed drinking alcohol shortly thereafter.

WAS THIS PHOTO EVEN REAL?

This image proved extremely difficult to verify. The EXIF data is fundamentally useless, as the original photo was never released online. Every existing copy online is a scan of the paper ad that was mailed out in 2007. So the image data only tells you who scanned it, not who took it.

But among the political consultant class, there is a sense that yes, the image is real.

“It kind of looks like it was taken out of context,” Ross concludes.

SAN FRANCISCO – FEBRUARY 02: San Francisco mayor Gavin Newsom looks over his shoulder during an event kicking off black history month February 2, 2007 in San Francisco, California. Mayor Newsom admitted to an affair with Ruby Rippey-Tourk, the wife of his re-election campaign manager Alex Tourk who resigned on January 31 after learning of the affair. (Photo by Justin Sullivan/Getty Images)

Three months after the image became public, Newsom was still easily reelected with a landslide 74% of the vote. It certainly helped that Newsom’s opponents were a cast of gag-candidate characters like Chicken John, and Power Exchange bondage club owner Michael Powers. But that also tells you something. No credible contender thought Newsom was weak enough to defeat, despite the many, many scandals.

“His apology after the Alex Tourk thing broke was very effective,” Ross says. “The crisis communications playbook, that was done almost perfectly.”

“He apologized with as little information as possible, and then never talked about it,” according to Ross. “It was the news. It was the hottest story in town. Until a couple days later, when it wasn’t. And every once in a while, another piece of gossip would bubble up.”

“The thing about San Francisco is, the public’s perception of how well the city is doing is all tied to rent,” he continues. “If you look back to 2007, it was a couple years after the dot-com bubble burst. The real estate industry in San Francisco was still not doing that great. You could rent an apartment for a reasonable amount of money and not feel like you were going to get evicted, it was before the [tech] boom started in 2008 or 2009.”

“People were feeling pretty good about San Francisco, and that reflected onto Newsom,” Ross adds. “Jobs may have been a little bit scarce, but jobs have never been a No. 1 issue in San Francisco. Housing has always been the thing that really determines how people feel about how the city is going. People in 2007 felt pretty good about the direction of the city.”

“He was popular,” according  to Ross. “He polled pretty much throughout his entire mayoral term in the high 60s or low 70s in terms of popularity. Which is 20 points better than Ed Lee or Mayor London Breed.”

While the case of who released this photo has never been proven, what has been proven is that it was a swing and a miss. The attack ad did not hurt Gavin Newsom’s campaign in the slightest. In fact, it may have helped him more, by establishing what powerful Teflon quality the man has as a candidate. And if he’s eyeing a higher office, that’s something his opponents will need to stay abreast of.