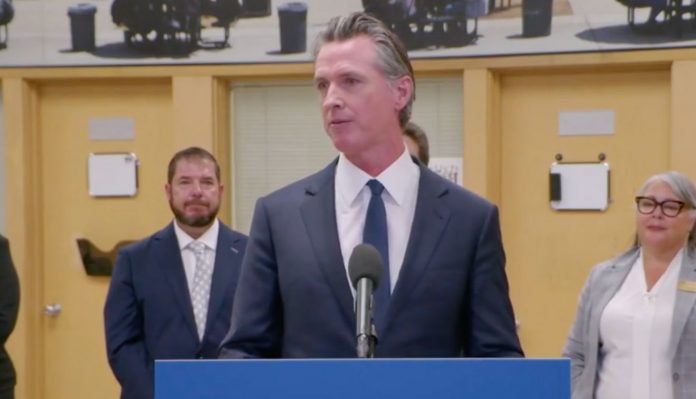 San Francisco would be one of the first counties under the jurisdiction of Gavin Newsom’s CARE Court bill, which is cruising through the state legislature with big momentum, despite questions whether it’s just ineffective and hostile bureaucracy.

Folks who were in San Francisco when Gavin Newsom was mayor will likely recall his Care Not Cash program, which he claimed virtually eliminated homelessness in San Francisco, though it very clearly did not. Now that’s he’s governor, Newsom rolled out a similarly named proposal called CARE Court (Community Assistance, Recovery & Empowerment Court) in March, introduced in a clearly pre-coordinated Heather Knight column in the Chronicle, and a headline saying it was “inspired by the misery on S.F. streets.”

“There’s no compassion with people with their clothes off defecating and urinating in the middle of the streets, screaming and talking to themselves,” Newsom told the Chron at the time. “There’s nothing appropriate about a kid and a mom going down the street trying to get to the park being accosted by people who clearly need help.”

The plan creates another layer of the judicial system wherein people suffering from mentally illnesses can be ordered into a court, and compelled to follow the mental health care plan. And KQED reports the CARE Court bill overwhelmingly passed the state Assembly (62-2!) on Tuesday, which bodes awfully well for its chances in the Senate.

#CARECourt passes the Assembly. Now it's back to the Senate for concurrence before it goes to the governor's desk: pic.twitter.com/VmMfXVRrVJ

“I think this is a major step towards building a system that is going to be effective, as opposed to the present system,” Santa Clara County Superior Court Judge Stephen Manley told KQED, who oversees a mental care diversion court. He describes the current system as one “where these individuals simply cycle through our jails over to the emergency room of a hospital, back to the streets, back to the jail, back to the hospital. And it doesn’t stop.”

You can sure argue he has a fair point. The Chronicle ran a piece last month showing that the same five mentally ill people cost the city $4 million in ambulance rides over the last five years.

According to a description on the California Health and Human Service website, the CARE Court “connects a person in crisis with a court-ordered Care Plan for up to 12 months, with the possibility to extend for an additional 12 months. The framework provides individuals with a clinically appropriate, community-based set of services and supports that are culturally and linguistically competent. This includes short-term stabilization medications, wellness and recovery supports, and connection to social services, including housing.”

This sounds lovely in theory, until you consider we don’t have this housing, nor, frankly, many of the other promised services. “It ignores the very stark reality that we’re living in this moment,” Anti Police-Terror Project deputy director James Burch told KQED. “We are tens of thousands of beds short in the Bay Area of the permanent housing that we need. … And we are woefully short on voluntary treatment programs.”

Should the bill pass, San Francisco would be one of the first counties obliged into the program by October 2023; the others are Glenn, Orange, Riverside, San Diego, Stanislaus, and Tuolumne Counties. The rest of the state would be required to be onboard by December 2024.

A 62-2 majority in the Assembly indicates a very safe bet that it will pass the Senate. And of course Newsom will sign it, it’s his bill. But it remains to be seen if, like Care Not Cash, Newsom’s mouth is writing checks that in reality, don’t cash.