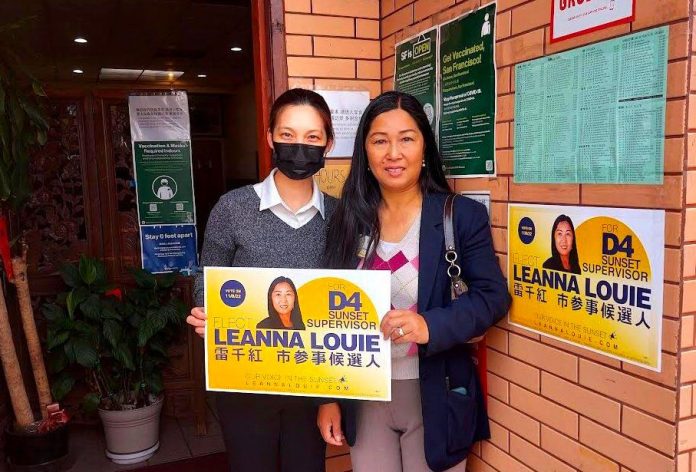 City Attorney David Chiu has removed District 4 supervisor candidate Leanna Louie from the November ballot, saying she “failed to meet her burden to prove she changed her legal ‘domicile’ from her long-time District 10 family home.”

District 4 supervisor candidate Leanna Louie had a terrible, horrible, no good, very bad Wednesday, amidst a firestorm of controversy after she called a Jewish journalist “NAZI” on social media. But Wednesday was not even her worst day of the week. That would be Friday, as Friday afternoon, City Attorney David Chiu and Department of Elections Director John Arntz announced that Louie would be removed from the November ballot, according to Mission Local, over residency concerns that she did not live in District 4 for the 30 days required before pulling papers to run (if she even lives there at all).

BREAKING: The City Attorney has determined that D4 Supe candidate Leanna Louie did not adequately prove her residency requirements, and has been stricken from the ballot.

The residency concerns stem not only from her pulling papers to run only 27 days after registering in District 4 (as opposed to the 30 days required by law), but also bouncing between four different addresses over the course of this year, and apparently having voted in a district in which she was not eligible. But if you enjoy this tea on this scandal, oh, there is more of it in the full 16-page City Attorney report, which includes transcripts of Louie’s interviews with City Attorney personnel.

The most stunning revelation there is that Louie admitted she didn’t know if she would even live in District 4 if she were elected District 4 supervisor. Referring to her and her fiancé, the report notes that “Ms. Louie says that they have not decided on their living situation after the November 8, 2022 election.”

But it’s also rather stunning to learn…. You can still get an apartment in San Francisco for $500 a month?

The matter is now closed on whether Leanna Louie will appear on the November ballot; she will not. But whether there is a District Attorney investigation into alleged voter fraud in the district wherein she did not live, that would be up to District Attorney Brooke Jenkins’s office. But let’s just assume this ends here.

And as a preemptive response to the inevitable comments that will appear below saying “Now do Shamann Walton,” in re: Walton’s purchase of a home in Vallejo, the answer is they already did. In a Monday Joe Eskenazi Mission Local report (ironically, the very report that set off Louie’s “Joe EskeNAZI” rant), City Attorney spokesperson Jen Kwart addresses this on the record. “Supervisor Walton contacted us in 2019, and we provided him advice about the residency rules that apply to Supervisors,” Kwart told Mission Local. “We confirmed that purchasing a house outside San Francisco would not make him ineligible for City office as long as he remained a resident of District 10.”

Related: D4 Supervisor Candidate Leanna Louie Defends Her Residency Record, But Now a Fourth Address Is In the Mix [SFist]