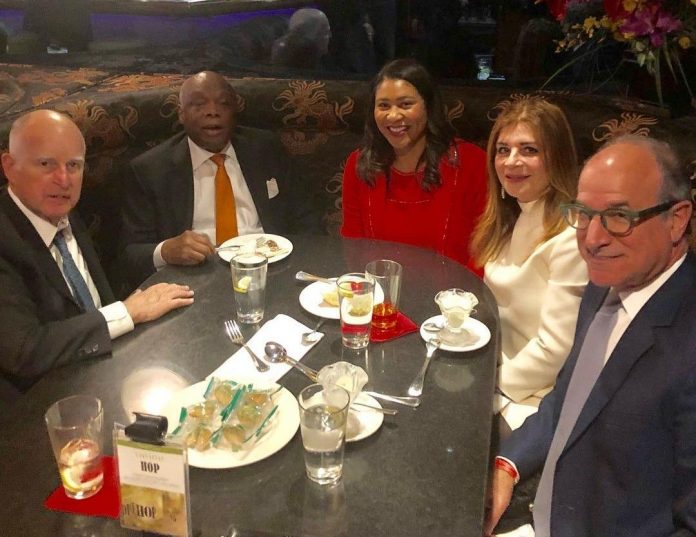 If you or someone you love has Makras Real Estate as your landlord, there may be some high-fives and delicious plates of schadenfreude in order.

As SFist speculated yesterday in our coverage of Mohammed Nuru being sentenced to seven years in prison, there were still some loose ends that could still produce more criminal sentences of powerful and well-connected City Hall types: former DBI inspector Bernard Curran still has his wire fraud and perjury trial forthcoming, ex-Public Utilities Commission general manager Harlan Kelly still has his time in the barrel coming for his own fraud and bribery charges, and local mega-landlord Victor Makras has bank fraud charges for a separate scheme also involving Harlan Kelly.

So we kind of figured the sprawling Nuru affair would still deliver more guilty charges to San Francisco’s high society. We did not expect these charges to come barely 12 hours later after Nuru was sentenced.

The subscription website Law360 reported around 11 a.m. PT Friday morning that Victor Makras had been found guilty of bank fraud. The SF Standard was quick to follow up with an explanation that the fraud involved Harlan Kelly and a $1.3 million loan from Quicken Loans. Mission Local adds that Makras was also found guilty of “making false statements to a bank.”

SFist will embed as many pictures as we can from the Makras Real Estate Facebook page, because folks, these images are likely to be scrubbed soon.

We have not yet found a Department of Justice announcement on the guilty charges. But the charges are from Makras’s 2021 indictment, which contains multitudes.

BREAKING: Real-estate broker Victor Makras, "the guy in every room for every mayor" found guilty of federal bank fraud charges.

This comes one day after ex-DPW boss Mohammed Nuru refused to cooperate with feds and was sentenced to 7 years in prison. https://t.co/otxeyZWPrQ pic.twitter.com/yWCAJNue2J

“Defendants Harlan Kelly and Victor Makras engaged in a scheme, plan, and artifice to defraud Quicken Loans, a lending and financial institution, as to a material matter, and to obtain money and property by means of materially false and fraudulent pretenses, representations, and promises,” the indictment says, in legalese.

The scheme involved Makras lending Kelly a great deal of money (for what in return, we still don’t know), and then coaching Kelly on how to inflate how much he owed Makras on paper. Meanwhile, Makras secretly paid off many of Kelly’s other loans, with the whole end goal of getting Kelly the favorable mortgage deal with Quicken Loans.

“Victor and Farah Makras are turning into quite the political power couple. In the past couple of months, the real estate magnate and socialite have hosted several fundraisers and put their full support behind new Mayor, London Breed…”https://t.co/k5y12oNWJy https://t.co/AUI3al9jxt pic.twitter.com/AtsVWAOGRU

If this all seems confusing, let’s just look at private text messages between Makras and Kelly that were intercepted by federal agents, regarding Kelly allegedly seeking an off-the-books loan from Makras in 2013,

“I believe 70 will give us a contingency until February. But we will [make] any amount work,” Kelly texted Makras, and you better believe “70” means $70,000.

The next day, according to the indictment, Makras texts back, “I recommend that I pay your credit cards directly. This will avoid a large check going into your account. Then needing to explain it to the bank. Banks do not like seeing anything unusual about the flow of cash in and out of checking savings accounts. This will make the loan process go easy.”

And wouldn’t you know!  Four days later, according to the indictment, “Makras caused four checks to be issued from his Bank of America Victor G. Makras Inc account ending in 2817 and totaling $70,000 to pay off outstanding credit card balances owed by Kelly and NK.”

(“NK” almost certainly refers to Kelly’s wife Naomi Kelly, the former City Administrator, who is suspected of being the person whom Mohammed Nuru tipped off about the feds closing in before this whole thing became public when Nuru was taken into custody in January 2020.)

And back to Mohammed Nuru: We have more interesting tidbits from his sentencing Thursday. The Chronicle reports details we learned about Nuru’s first (secret) arrest in 2019, that “FBI agents pulled Nuru out of a security line at the John F. Kennedy Airport in New York,” and “he initially agreed to cooperate — then turned around and informed friends who were potential targets of the investigation, prompting his rearrest in January 2020.”

KQED adds that Nuru’s attorneys argued for a lighter sentence because of health issues of which we had not been aware: “Nuru’s poor health from diabetes, a recent heart attack and two surgeries for heart problems.”

The Nuru thing, though, is pretty much resolved. But a guilty verdict on Victor Makras, who is quite wealthy, powerful, and well-connected means that, theoretically, fucking anyone at City Hall could go down if he decides to cooperate to lighten his own sentence. Makras has served on the SF Ports Commission, SF Police Commission, the PUC Board, and the SF Employees Retirement System Board.

Fans of The Princess Diaries know that “It never comes down on Willie Brown.” But could it finally? That may be a stretch, but it could also be that come November, the elections are not even the biggest political story in San Francisco.