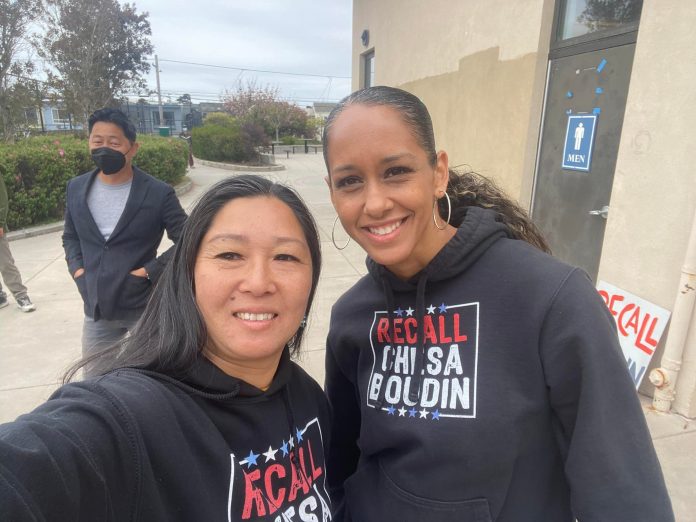 Some investigative reporting into District 4 supervisor candidate Leanna Louie prompted her to call a Jewish reporter “NAZI” on social media, which her opponent Gordon Mar says is “shockingly anti-Semitic.”

District 4 supervisor candidate Leanna Louie has clearly had something of a vendetta against the news outlet Mission Local, and by extension, that website’s managing editor Joe Eskenazi. Eskenazi has broken a string of potentially damaging investigative stories about Louie in recent weeks, starting on August 10 with a report that she may not have met residence eligibility requirements to run in District 4, followed by an August 16 report that the Department of Elections referred her case for voter fraud investigations to both the City Attorney and District Attorney, and a follow-up this past Monday that she may have voted illegally in an April state Assembly race.

Louie went the ill-advised way of unpolished politicians past and took to both Facebook and Instagram Tuesday afternoon with a post that twice referred to Joe Eskenazi as “Joe EskeNAZI,” according to KTVU. She has since deleted both posts and apologized. But when you’re running for office and call someone ”NAZI” on social media, particularly when that person is Jewish, people are going to take screenshots.

How toxic are San Francisco politics? Leanna Louie, candidate for Board of Supervisors, just posted this. It refers to Joe Eskenazi, who is Jewish, as EskeNAZI.
He’s the @MLNow reporter who broke the story about her serious legal troubles.
Time to end the campaign, Leanna. pic.twitter.com/zBq9UDXDE9

The Examiner’s Gil Duran did the honors. As seen above, Louie posted sometime late Tuesday afternoon: “Have I shared these fun photos we took at KQED! It was so nice to talk to a journalist who actually had a dialogue with me. Unlike Joe EskeNAZI who called me and talked over me and didn’t even write any of my responses. EskeNAZI totally wrote what he wanted and called his friends and members of the Weather Underground from Michigan, Berkeley and other places to validate his points.”

Sigh, where do we begin to unpack this? First off, it is obviously bad form to call a Jewish person “NAZI.” (Louie has since claimed “I did not know that Joe is Jewish when I made the post,” which may be true, but still shows a pretty deep lack of cultural awareness, and shows she’s one of those people who throws around the term willy-nilly online, ahem SFist commenter pool.) The Weather Underground stuff reflects a bizarre obsession Louie has with a radical leftist group that dissolved decades ago, though former District Attorney Chesa Boudin’s parents were affiliated with it.

D4 candidate Leanna Louie today posted that Mission Local editor Joe Eskenazi is a "NAZI" and the election experts he quoted who decried her behavior are "terrorists."

Eskenazi himself has responded in a Mission Local report. “I am used to stuff like this, ever since grade school, when they teach non-Jews what the Holocaust is,” he said. And in reference to the subject matter experts he quoted in his articles, whom Louie called Weather Underground, Eskenazi added, “I think Ms. Louie owes an apology to Chris Thomas, the famously non-partisan 36-year election director of Michigan, and Ann Ravel, an Obama appointee to the Federal Election Commission, whom she described as terrorists.”

I expressed my frustration with Joe’s barrage of news articles in a highly insensitive, inappropriate and uncharacteristic manner. This formatting of his surname was in poor taste and I want to sincerely apologize to Joe Eskenazi, his family, and the Jewish community. 2/4

And Louie has gotten around to apologizing. “This formatting of his surname was in poor taste and I want to sincerely apologize to Joe Eskenazi, his family, and the Jewish community,” she tweeted shortly after midnight this morning. “I did not know that Joe is Jewish when I made the post. I have a long history of advocating for marginalized people and my post was inappropriate. I love people of all backgrounds, sadly not everyone loves me back.”

This rhetoric and these beliefs have no place in our politics.

While my opposition continues to inflame divisions, court extremism, and ignore facts, I will continue the work to bring our communities together and move forward.https://t.co/keAn6skimM

Well, yeah, she’s clearly burned a few bridges, particularly among members of the Board of Supervisors who are also Jewish. As for her November opponent Gordon Mar, he told the Chronicle that “shockingly anti-Semitic and hateful comments are absolutely unacceptable” and “reflective of the reactionary extremism that has infected our political discourse this year.”

Parenthetically, this is kind of an awkward look for KQED, what with the whole “NAZI” comments next to their brand name and all. But it seems these photos may not be as fresh as Louie presents them. There is no recent mention of Louie on KQED, so it’s not like she was on ”Forum” yesterday or anything, as the post seems to imply.

KQED’s most recent mention of Louie was a July 29 story about school board member Ann Hsu’s controversial comments.  In a Tuesday night response, KQED reporter Joe Fitzgerald Rodriguez tweeted, “I interviewed Leanna Louie, Gordon Mar, Matt Dorsey, Honey Mahogany and Joel [Engardio] for our voter’s guide, asking open-ended questions about a variety of positions,” and “The interview with Louie was before Joe’s stories on her residency broke.”

And honestly, the residency issue is still the major issue here, as it could knock her off the ballot, or even bring charges. Mission Local reported today that “Louie and her lawyers met with the City Attorney Monday over related allegations of residency fraud. The outcome of that meeting has not been announced.”

It seems notable that City Attorney David Chiu has been actively investigating the legal referral he received from the Department of Elections, but District Attorney Brooke Jenkins has been mum on the referral her office received. And as we see above, Louie was not only a very vocal advocate of the Chesa Boudin recall, she seems to frequently appear alongside Jenkins herself. (Yes, people could buy matching Recall Chesa Boudin sweatshirts, and they are still available on Amazon for $31.99).

Maybe Louie is overblowing the above claim that Jenkins is “my battle buddy.” Maybe she is overstating her influence in the DA’s office in taking credit for Nancy Tung’s appointment, saying “Dear Nancy Tung… My patrol battle buddy, I advocated for your appointment.” And maybe she just likes to seek out a spot next to Brooke Jenkins when the cameras are out.

As for Louie’s residency status, a spokesperson for the DA’s office tells SFist, “We’re declining to comment on the matter.”

Related: D4 Supervisor Candidate Leanna Louie Defends Her Residency Record, But Now a Fourth Address Is In the Mix [SFist]