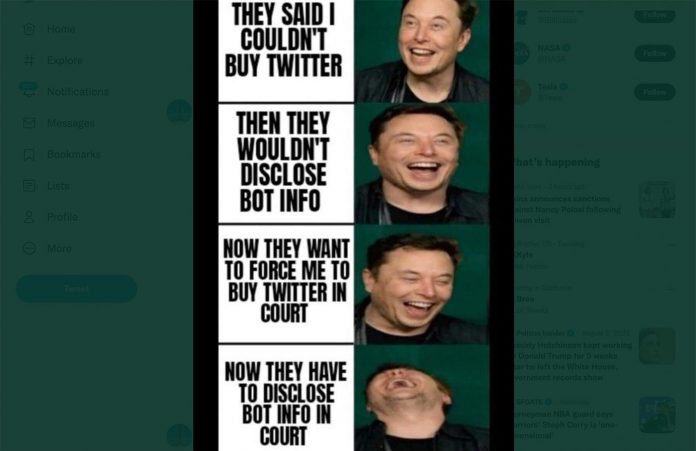 Well, the fun hasn’t stopped in Delaware’s Chancery Court this week, with Elon Musk filing a fraud countersuit against Twitter, Twitter delaying its unsealing so they could respond and redact things.

Musk filed a countersuit last week in the Delaware Court of Chancery, alleging fraud on the part of Twitter — and this all has to do with the same claims he’s been making himself, in tweets, for several months about Twitter being overrun with bots and spam accounts. Experts have said that accurately assessing the number of fake accounts among the many millions on Twitter would be a difficult task, but apparently Musk didn’t base his claim on anything more than a publicly available website called Botometer.

Twitter says that it has, in good faith, provided Musk with all of the information he’s requested since he initiated a hostile takeover back in April. And in its response to Musk’s fraud counterclaim, the company’s attorneys say that Twitter provided “massive flows of data” to Musk and that it “spent significant time and resources to compile, and in many instances create, data collections and information” to satisfy the billionaire’s requests. Twitter contends that no other service, including Botometer, could replicate the process by which it came to its 5% estimate of the bot-account population on the platform — which included significant human review of tweet content and platform use by these accounts.

In a great irony and gaffe, Twitter’s lawyers point out that Botometer “earlier this year designated Musk himself as highly likely to be a bot.” As New York Magazine writes, “Can you imagine the feeling of ecstatic joy that went through the lawyer who wrote those words?”

NY Mag suggests that Twitter scored a major win this week, in the court of public opinion and Delaware’s Chancery Court, by getting the judge to agree to delay unsealing Musk’s counterclaim. “Twitter just won a round of the public-facing bout,” they write, saying that optics are pretty important here since Twitter’s own reputation as a social media platform hangs in the balance.

Also going in Twitter’s favor is the fact that the judge assigned to the case, Chancellor Kathaleen McCormick, recently forced a private equity firm to go through with the $550 million purchase of a cake company it no longer wanted.

Twitter says in its response this week that Musk’s fraud claim is “a story, imagined in an effort to escape a merger agreement that Musk no longer found attractive.”

Musk’s claims about Twitter in his countersuit may reveal a piece of his motive to back out in terms of buyer’s remorse. As the Wall Street Journal explains, Musk’s counterclaim alleges that Twitter obfuscated and stonewalled when it came to his requests about bot account counts because they new their share price wouldn’t hold up in a bear market. The company responded that Musk doesn’t have “a shred of evidence” to support this.

It remains to be seen whether the court may try to force Musk’s hand to go through with the $44 billion deal — and experts say it’s an unprecedented situation where it’s unclear how the court can enforce such a ruling. A more likely outcome will be Musk paying his $1 billion breakup fee to Twitter, as stipulated in the merger agreement, and/or coming to some settlement where he still takes over Twitter but for a lesser price.

The trial is set for October 17.

Facebook
Twitter
Pinterest
WhatsApp
Previous articleFlashback: The Risqué Gavin Newsom Photo That Stared Down His 2007 SF Mayoral Campaign
Next articleHunter Pence To Be Inducted Into Giants’ Wall of Fame In September