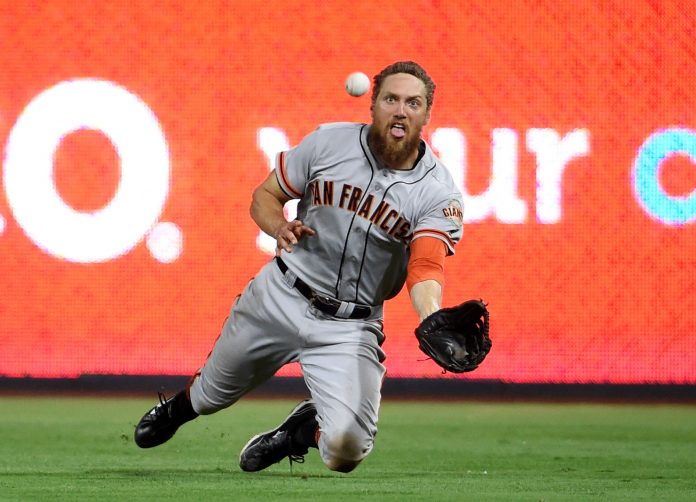 In a season short on glowing headlines about the San Francisco Giants, fans will have reason to rejoice in September, and an excuse to reminisce about the glory days of recent past.

On September 17, Hunter Pence will be honored on the Giant’s Wall of Fame outside Oracle Park on King Street. Pence — who helped win two World Series with San Francisco — will be the 55th Giant represented on the wall, and will be celebrated in an on-field ceremony during a series against the Los Angeles Dodgers.

In a statement, Pence said: “I’m truly humbled by this honor. To be included among people who I consider legends of the organization is surreal. and I’m overwhelmed with gratitude to even be considered.”

Hunter Pence, at bat about two years ago at Oracle Park. His stance, like so many aspects of his game, remains on the “unconventional” side, but his impact on the Giants will not soon be forgotten. (Photo by Lachlan Cunningham/Getty Images)

Known as ‘The Reverend’ for his rousing speeches — and winner of the Giants’ Willie Mac Award in 2013 which recognizes the most inspirational player — Pence was a unique mixture of weird, talented and clutch, and purposefully goofy. Think Matthew Mcconaughey meets Roy Hobbs in “The Natural.”

“He’s got, like, a really horrible swing,” said former Giant’s outfielder Gregor Blanco to start off a Pence highlight reel. “He throws, like, really weird. He runs weird. Everything he does is, like, awful. But, he has something that is different from everybody else. The preparation, the love for the game — he loves this game so much. He loves to compete more than everybody else. He works harder than everybody else, and he really believes that he can be the greatest player ever.”

The criteria to get on the Giants Wall of Fame have apparently expanded, according to the San Francisco Chronicle. Previously, only players who’d been with the Giants for nine seasons, or five seasons with an All-Star selection, were eligible; Pence was a Giant for eight seasons. The Chronicle said that the Giants now include individuals on the Wall “who have made a remarkable impact on the franchise.”

After retiring in 2020, Hunter Pence stayed put in San Francisco.

“There’s a lot of powerful energy in this city.”

Hunter Pence puts it all on the line in 2016. (Photo by Jason O. Watson/Getty Images)

Pence has gone into the coffee business with his wife Lexi; the couple opened Pineapple Labs, which sells handcrafted coffee blends and mugs online. Proceeds often go to charity, according to the Chronicle.

In his statement following the Wall of Fame announcement: Pence said: “The Giants’ organization and the San Francisco community are my family. This honor wouldn’t be possible if not for the love, support and dedication I’ve shared with them. I can’t thank the club, my teammates and the fans enough for the unforgettable memories.”

After being swept by the Dodgers last week — the first time San Fransisco has been swept at home in a four-game series against the Dodgers since 1977 — the Giants beat the Oakland As on Saturday and Sunday.

Facebook
Twitter
Pinterest
WhatsApp
Previous article‘Botometer’ That Musk Used to Make Counterclaim About Twitter Spambots Once Deemed Musk Himself a Likely Bot
Next articleFriday Likely to Be the Best Weather Day at Outside Lands, But We Could See Three Sunny Afternoons