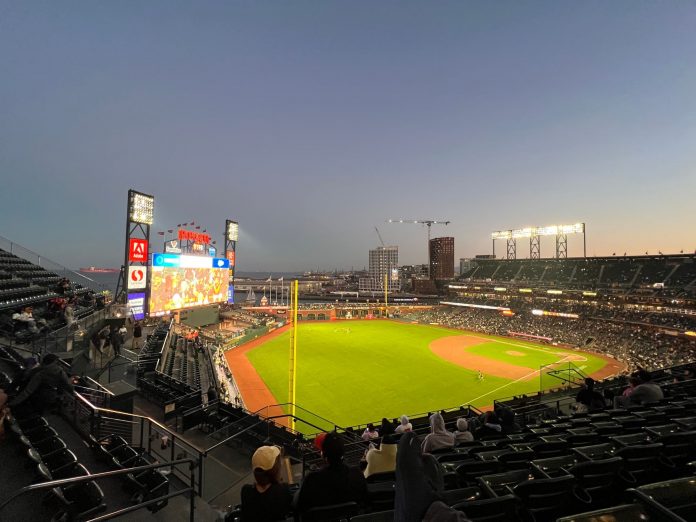 A lighting malfunction at Monday night’s Giants-Padres game delayed play for about 40 minutes, but a spontaneous mass-karaoke version of Journey’s “When the Lights Go Down in the City” broke out.

In retrospect, it was probably the highlight of Monday night’s Giants-Padres game when, as KRON4 reports, the ballpark stadium lights went out for around 40 minutes. At roughly 7:48 p.m., in between the second and third innings, a lighting malfunction caused some of the ballpark’s floodlights to not power on. But then something very San Francisco went down.

Giants playing Journey’s “When The Lights Go Down in the City” during a delay due to stadium lights malfunction. Can’t make this up. pic.twitter.com/r931H99cNf

A clever stadium operator quickly turned on Journey’s unofficial fan favorite track “Lights,” better known by the lyric “When the lights go down in the city.” The crowd joined in for a joyful karaoke sing-along, reminiscent of those World Series moments with Steve Perry when he led the crowd in singing the old standby.

It’s a shame the Giants have to play in this malfunctioning ballpark while the Oakland Coliseum and it’s working lights sits empty just across the Bay. https://t.co/oY5PwvREaG

“It’s a computer glitch right now,” NBC Sports Bay Area Mike Krukow explained, while the lights were down in the city. “The lights are telling the engineers that they are working at full capacity, but it’s obviously not happening.”

“This could become a safety issue,” he continued. “The reality of it is it’s too dark to play. It’s not safe.”

The lighting mess got fixed, and the game resumed shortly before 8:30. While this lighting malfunction happened relatively early in the game, it still wasn’t even the game’s first delay. Earlier in the contest, per KRON4, “Home plate umpire Marvin Hudson was forced to leave the game after slipping while tracking a foul pop-up. Second base umpire John Tumpane took Hudson’s place behind home plate.”

And despite an eighth inning rally, the Giants continued their rough patch and would go on to lose the game 6-5. They now sit a daunting eight-and-a-half games out of the last NL Wild Card slot.

Related: Giants Roll Out ‘Flex Pricing’ to Try to Fill Seats at the Ballpark [SFist]