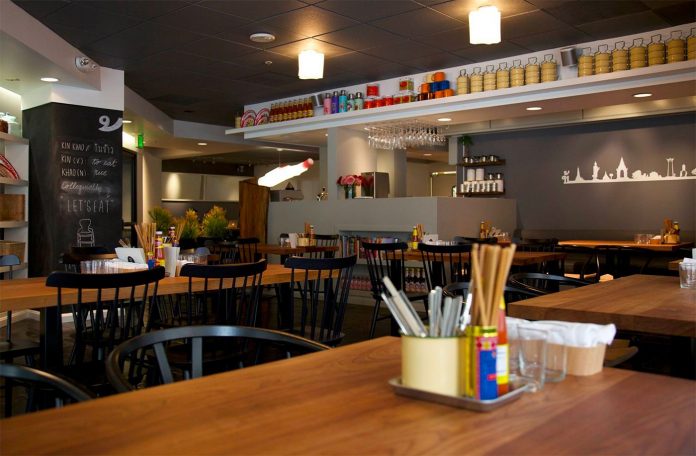 It’s been two and a half years without Kin Khao in Union Square — though Dogpatch residents had a brief pop-up to enjoy that ended last summer — but now the Michelin-starred Thai restaurant is returning at last.

Chef-restaurateur Pim Techamuanvivit has been earning accolades at her larger Japantown restaurant Nari since its 2018 opening, but it’s the smaller Kin Khao at the Parc 55 hotel that holds a Michelin star — and kept that star in last year’s guide despite not being open. It’s notable for being the first Thai restaurant in San Francisco to earn a Michelin star, and now, finally, it has a reopening date: September 14.

As Techamuanvivit explains to the Chronicle, the reopening was delayed by the long closure of the Parc 55, which did not officially reopen until May. And ever since, there’s been a process of staffing back up and preparing to Kin Khao’s kitchen rolling again.

The September reopening will have some limited hours and a truncated menu, but favorites like the chicken wings will be available.

“We’re really opening step-by-step because we want to make sure we get everything right, the way we want it, before we start extending ourselves,” Techamuanvivit tells the Chronicle.

She also notes that there’s been a bit of wait-and-see happening among downtown restaurateurs who still haven’t reopened their businesses. “If no one opens, if we’re all waiting, then everyone’s playing a game of chicken,” she tells the Chron, saying she hopes Kin Khao can be a catalyst for bringing this part of downtown back to life.

When Techamuanvivit opened Kin Khao in 2014, she said she was “on a mission to liberate her beloved Thai cuisine from the tyranny of peanut sauce.”

For many years, Techamuanvivit operated a popular baking and cooking blog called Chez Pim, where she was perhaps best known for her award-winning jams. Born and raised in Bangkok, Pim has gone on to open three restaurants, including the Michelin-starred Bangkok eatery Nahm.

Kin Khao (55 Cyril Magnin Street, entrance near Mason and Ellis) will reopen September 14 for dinner only at first, Wednesday to Sunday — 5:30 to 9:30 p.m. Wed., Thurs. and Sun., and 5:30 to 10:30 p.m. Friday and Saturday. Hours are expected to expand back to seven days per week, including lunch, in the coming months.