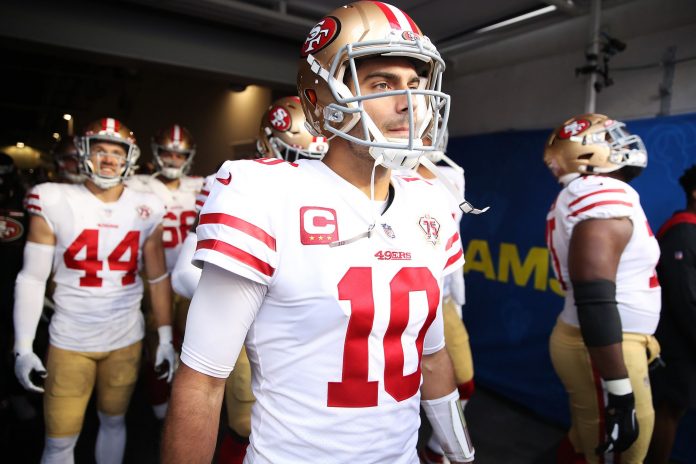 Instead of being traded, 49ers quarterback Jimmy Garoppolo will be the highest-paid backup QB in the NFL, albeit with a nearly $18 million pay cut.

After he tossed that horrendous interception to end the 49ers NFC Championship Game loss in January, it has been a foregone conclusion that quarterback Jimmy Garoppolo would be traded with haste. After all, the No. 3 overall pick from the 2021 draft Trey Lance had his rookie year of clipboard duty complete, and appeared in six games, so the Niners would simply enjoy the bidding wars for Garoppolo’s playoff-caliber services.

Jimmy Garoppolo and the 49ers agreed to a restructured one-year contract that will keep the QB in San Francisco this season, per sources. The contract contains no-trade and no-tag clauses, assuring Garoppolo will remain in SF this season and have the freedom to leave in 2023. pic.twitter.com/2tj0dDGgN9

But those bidding wars never happened. And Monday afternoon, KRON4 reported that Jimmy Garoppolo will stay with the 49ers, on a restructured one-year contract with a much, much lower salary.

ESPN was first with this news. “Garoppolo’s new deal is worth $6.5 million in base, fully guaranteed,” according to ESPN. (He was previously slated to be paid $24.2 million, though that money was not all guaranteed.) “He has another total of $500,000 in roster bonuses. He also has playtime bonuses that can boost the value by another nearly $9 million.”

The #49ers and QB Jimmy Garoppolo are finalizing a new contract that will make him the highest paid backup in the NFL, sources tell me and @MikeGarafolo. A solution that keeps Jimmy G on the roster while making clear it’s Trey Lance’s team going forward. pic.twitter.com/HZJf5Zc48m

Six months ago, this would have seemed an unacceptable, sibling-kissing arrangement. But the trade market for quarterbacks this NFL offseason was ice cold (Cleveland’s Baker Mayfield was traded for a mere conditional fourth- or fifth-round pick in 2024, which, why even bother). And Trey Lance, frankly, did not inspire a ton of confidence in his preseason outings.

Last Time Jimmy Garoppolo was a back up QB pic.twitter.com/jx8cdfTQIt

And why not keep Jimmy G? Remember, since the Halloween Day 2017 trade that brought him here from New England, the 49ers were 35-16 in games that Garoppolo started. Conversely, they were 8-31 in games started by quarterbacks not named Jimmy Garoppolo during that same period.

Drawing Jimmy G every day until he gets traded. Day 208: pic.twitter.com/2IOHpcmziM

So this situation is now resolved. The biggest question now is what happens with the work of digital artist Rita Carvalho, who has gained internet fame by “Drawing Jimmy G every day until he’s traded,” now that Jimmy G will not in fact be traded.

Image: INGLEWOOD, CALIFORNIA – JANUARY 30: Jimmy Garoppolo #10 of the San Francisco 49ers prepares to take the field with teammates before the NFC Championship Game against the Los Angeles Rams at SoFi Stadium on January 30, 2022 in Inglewood, California. (Photo by Christian Petersen/Getty Images)