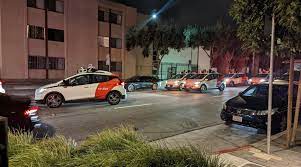 GM Cruise snafus have blocked SF streets with suddenly immobilized self-driving cars at least three times in the last two months, with one incident where almost 60 vehicles stopped, and another where Cruise “lost touch with its entire fleet.”

We wrote last week about an eerie cyber-snafu with GM Cruise self-driving robotaxis, where at least eight of the driverless cars ganged up and blocked Gough Street “for a couple of hours,” and would not move until GM employees showed up and moved the cars manually.

Wired has a new report detailing numerous incidents of GM Cruise vehicles suddenly freezing and stopping traffic in San Francisco. These include that night’s incident, but also a previously unreported incident that same night “near San Francisco’s Golden Gate Park,” where two normal human-driven cars “and a paratransit bus were trapped in a robotaxi sandwich.”

Terrifyingly, Wired adds that on that particular evening “Internal messages seen by WIRED show that nearly 60 vehicles were disabled across the city over a 90-minute period after they lost touch with a Cruise server.”

A very San Francisco Saturday night. A pack of 3 driverless @Cruise cars got confused and stopped and blocked two lanes of Masonic. The robots will win just by blocking traffic. pic.twitter.com/63Xi8RG21I

This had happened in previously unreported incidents, too. On the night of May 18, according to internal documents Wired acquired, “the company lost touch with its entire fleet for 20 minutes as its cars sat stopped in the street.” (This is documented by a passerby in the tweet above.) Wired adds that in that incident, “Company staff were unable to see where the vehicles were located or communicate with riders inside. Worst of all, the company was unable to access its fallback system, which allows remote operators to safely steer stopped vehicles to the side of the road.”

@Cruise walking past #GoldenGatePark thankfully night isnt it's busiest hour or this would have been a bigger accident. This is why they need a driver in the car incase something goes wrong! Like if somebody had hit that how are they going to get the insurance information? pic.twitter.com/bfQAWkzTme

For good measure this appears to have happened again on June 24, as seen above, where it was apparently only one GM Cruse vehicle that froze, and other drivers were able to maneuver around it.

Cruise spokesperson Tiffany Testo said in a statement to Wired that “We’re working to minimize how often this happens, but it is and will remain one aspect of our overall safety operations,” That doesn’t really explain why this keeps happening, nor does it inspire much confidence that it won’t happen again and again, nor does it show any concern for potentially deadly consequences.

Wired’s report got some of its information from “A letter sent anonymously by a Cruise employee to the California Public Utilities Commission” sounding the alarm. So apparently someone on the inside at Cruise feels this is a showstopper problem. And the only reason we know about any of this is via that anonymous letter, or regular folks who just happen across these snafus and post their experience to social media.

Cruise does not seem keen to publicize the frequency of these incidents, and the California Public Utilities Commission that regulates these machines clearly knows of the trouble, and seems content to allow it to continue.

That may mean there will be no regulatory blowback, or operational changes, until an emergency vehicle gets blocked and/or something tragic happens. So for pedestrians, residents, and drivers in the City and County of San Francisco, we can only hope the roulette ball of that tragedy, or those tragedies, does not fall upon us.