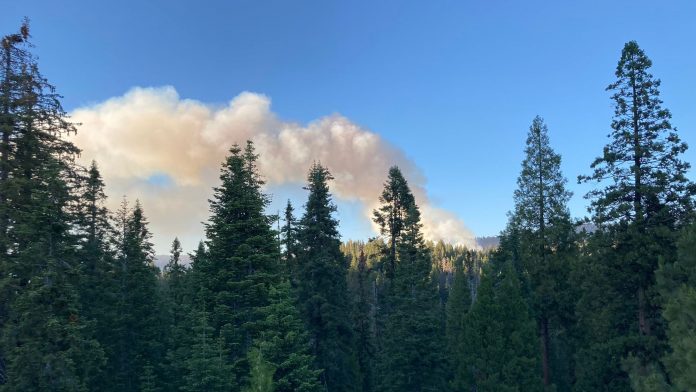 The Washburn Fire in Yosemite National Park measures over 1,800 acres as of Sunday afternoon — more than doubling in size from the day prior — and remains completely uncontained, extending ever so slightly closer now to Mariposa Grove… where some 500 mature giant sequoias are rooted.

While not a CAL FIRE incident, the Washburn Fire is now the second-largest wildfire burning in the state, just behind the Electra Fire in Amador County that is 80% contained at 4,478 acres in size. Overnight, the windswept fire threatening one of the largest groves of giant sequoias in the world has effectively doubled — presenting even more of a risk for the over 360 fire personnel working to contain the fire from the ground and air.

Moreover: The Washburn Fire’s location, which is quite isolated and away from accessible roadways, makes it difficult for ground units to reach. And it doesn’t help that the area the blaze is burning inside has a large amount of dead flora to act as fuel.

“The fire is burning in difficult terrain with continuous heavy fuels in and around the fire,” fire officials said on InciWeb, a site for coordinating fire response, per CNN. “Significant tree mortality from 2013-2015 has left significant dead standing and dead fallen fuels. This also presents significant safety hazards to firefighters.”

The majority of the fire’s new growth has extended south… but it has also extended slightly toward  Yosemite’s famed Mariposa Grove of giant sequoias. But fire officials are still hopeful some level of containment of the blaze can be reached, sooner rather than later.

“We’re hoping to get some containment there but the fire has been very active,” said Nancy Phillipe, a Yosemite fire information spokeswoman, to the Chronicle. As of Sunday afternoon, there are no reports of the park’s well-known sequoias — many of which are thought to be over 2,000 years old — being damaged as a result of the fire.

No injuries from the fire have been reported as well, but the Washburn Fire’s “moderate fire behavior” has created dangerous conditions for both aerial and ground crews as reports of flying tree debris have been cited.

Adding to the climate crisis woes: Blistering hot temperatures and declining humidity present this weekend (that may extend into next week, as well) is making it easier for the fire to spread across dry vegetation build-up.  Air quality index levels in the region have also reached “very unhealthy” levels with readings as high as 217 PPM recorded in parts of the Yosemite Valley; smoke impacts in the area are expected to continue in the coming days.

Though the southern entrance to Yosemite on Highway 41 remains closed, other entrances to the park are still accessible to other areas of the park that are still open.