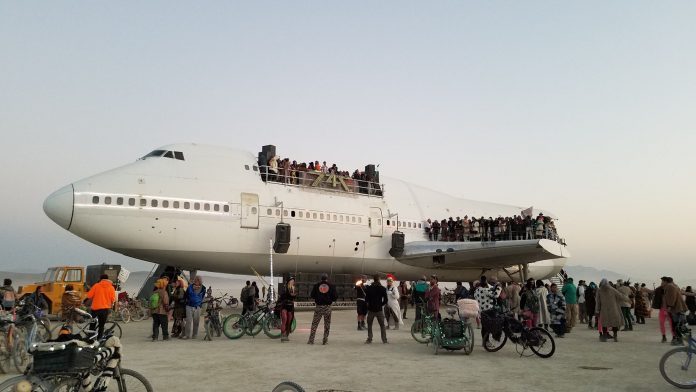 One of Burning Man’s grandest art projects, which turned into one of its grandest embarrassments, is off to the Las Vegas strip to live out its life as a new tourist attraction.

Sigh… SFist didn’t know what we were starting back in 2015 when we br0ke the story that someone was bringing a 747 jumbo jet to Burning Man that year. That report brought national media attention, even though they couldn’t get it together to get the plane out there that year. The 747, dubbed “Big Imagination,” eventually made it out to Burning Man in 2016. But it became kind of a huge embarrassment in 2018 when they couldn’t get the plane off the playa, effectively leaving it sitting there abandoned for a couple weeks, and sort of wore out the aircraft’s welcome with the federal Bureau of Land Management that manages the desert area.

Video: The Burning Man 747 has been abandoned in the desert: https://t.co/Wg9vNoYdNy pic.twitter.com/aXQf7GI6ha

But if you can’t make it at Burning Man, maybe you can skip town and make it in Las Vegas. That’s the idea, at least, as a real estate company has bought the 747 from that particular Burning Man artist collective, and is converting it to a Las Vegas tourist attraction.

The Boeing 747 jumbo jet that turned heads as an art installation at Burning Man six years ago has been purchased to become a new Las Vegas landmark. https://t.co/9qLWvweUXP pic.twitter.com/XE4laiKNb7

“We are incredibly excited about the immeasurable creative opportunities that come with repurposing this 747 jet,” said Winston Fisher, CEO of some Las Vegas “immersive playground called AREA15, in a press release. “The possibilities of what we can accomplish with this purchase are endless, and we look forward to sharing more as our vision takes shape.”

That same press release says that the Burning Man 747 will “Return to Las Vegas as an Immersive Experience.” I have to admit, I throw up in my mouth a little bit every time I hear the phrase “immersive experience” to describe something anymore. It’s a phrase so overused and meaningless that at this point, it can basically can just mean “We put up some blinky lights.” But these people understand Las Vegas tourism marketing better than I do, and if the plane has a home, then that’s better than it sitting out in the desert.

According to the release, the 747 currently “sits at the Las Vegas Speedway where it will be temporarily stored until further notice.” If I were them, I would double-check that my airplane-transporting affairs were still in order.

Related: No, Someone is Not Bringing a 747 Jumbo Jet to Burning Man This Year [SFist]

Facebook
Twitter
Pinterest
WhatsApp
Previous articleSF Theaters Announce Next Season Lineups Including ‘Jagged Little Pill,’ ‘Mean Girls,’ ‘Six,’ and ‘The Wizard of Oz’
Next article‘Octet’ at Berkeley Rep Is a Beautiful and Evocative Trek Into the Depths of Internet Hell