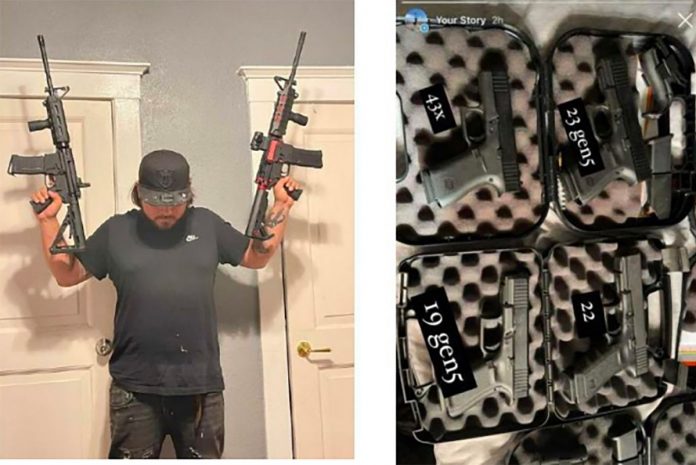 Federal prosecutors say that 26-year-old Roy Montoya of Oakland was using Instagram to help sell unserialized ghost suns, and he’s been charged with unlicensed firearm dealing — which can come with a sentence of up to 10 years. He was arrested and charged in April, but since has been let out of jail pending trial.

As the East Bay Times reports, Montoya was released on an unsecured $50,000 bond in May against the objections of prosecutors, who called him a serious flight risk. U.S. Magistrate Judge Donna Ryu ordered the release.

Montoya already tried to flee to Mexico once, booking a one-way ticket after federal authorities raided his home in mid-April, but he was arrested before he could get on a plane.

Investigators were alerted to Montoya’s alleged business dealings via a now defunct Instagram account called “COUPESGOINGCRAZY” which posted images from sideshows. It’s not clear if the Oakland Police Department may have been doing the initial investigating, or how this came about, since it doesn’t seem like the FBI should have been interested in sideshow crackdowns — unless there was some larger car theft ring or something they were after.

Investigators uncovered DMs or “discussions” on Instagram between the sideshow account and one called “HAZELPEWPEW” which allegedly belonged to Montoya.

They then say they found other exchanges Montoya had on the platform, and charging documents says that he discussed smuggling ghost guns to Mexico.

Montoya allegedly discussed the growing demand in Mexico for “Glock handguns, AR-15 style firearms, Draco pistols” and AK-47s, and he reportedly wrote in one exchange, about driving across the border, “Ima vacuum seal everything and stash it in the gas tank.”

Investigators also say they found a photo on Montoya’s phone of “an assault rifle equipped with a grenade launcher.”

The raid on his Oakland home found numerous gun parts and ammunition, as well as two ghost guns, a pistol and a machine gun rifle.

The case comes amid numerous crackdowns around the country on ghost guns. Last year, now outgoing San Francisco DA Chesa Boudin launched his own initiative to go after the sellers of ghost gun parts online. And Attorney General Merrick Garland has his own effort underway to ban the sale of ghost gun kits under a federal rule change, but the process of making that change will take time.

Facebook
Twitter
Pinterest
WhatsApp
Previous articleDay Around the Bay: Klay Thompson Impersonator Banned From Chase Center
Next articleThe Tenderloin ‘Formerly Known As Linkage’ Center To Shut Down at the End of the Year