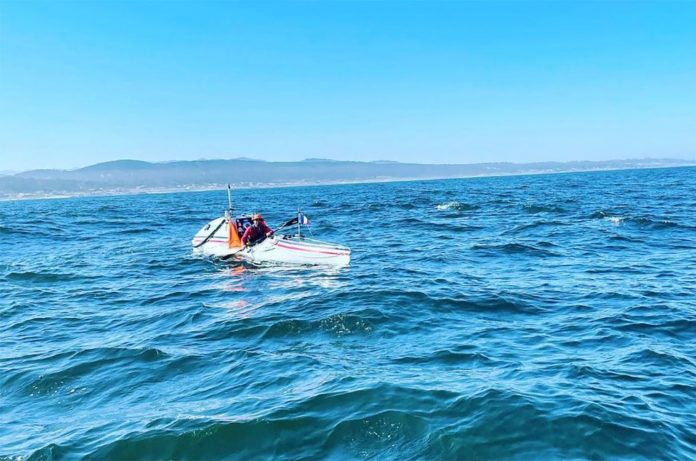 At some point the Coast Guard has to be like “This guy again?”, but a French-born kayaker with a custom-made vessel and an irrepressible desire to put himself in harm’s way is attempting a solo journey across the Pacific for a second time.

You may recall the tale of Cyril Derreumaux whose June 2021 attempt to row to Hawaii was stymied after he spent several miserable days in choppy surf, unable to move (or eat, or drink, apparently) about 50 miles off the coast of Santa Cruz. He called in an emergency rescue from the Coast Guard on Day 6, and then took smiling photos with his rescuers.

Now, one year later, the 45-year-old adventurer is off again as of this morning, attempting to make the 60- to 70-day journey, unaided, in a 23-foot craft equipped with a sleeping cabin, navigational equipment, a mini-desalinization machine for water, and a sea anchor, hoping that he doesn’t get thwarted by nature once again.

He still appears to have the longtime girlfriend he mentioned in press coverage of last year’s journey, interior designer Ashley Redmond — though he acknowledged that one reason he didn’t immediately embark on a second attempt last year was the stress that this project puts on her.

Derreumaux told the Chronicle, regarding last year’s aborted trip, “I had to admit, like, yes, I guess I wasn’t prepared.”

Since last June, he’s apparently done more training off the California coast, and spent time “honing logistics.” And as of Tuesday, he’s paddling off the coast of Monterey, having launched from there this time, rather than his home harbor of Sausalito.

You can track his progress in real time on this website. And below he shows off his “water maker” yesterday before his departure.

This remains an insane undertaking of someone with a peculiar sort of death wish, and as Derreumaux said last year, “The question comes up, what if I do die? Was it worth it to lose 40 years of your potential life for a two-month adventure? To me, it’s worth it. But I can’t really explain why.”

The solo journey from the California coast to Hawaii has been completed by a few other semi-crazy people in recent years, though in boats that were a good deal bigger and heartier than the narrow craft Derreumaux is using.

In the midst of the pandemic two years ago, British rower Lia Dutton completed the journey after 86 days and two capsizes. Last year, one of the world’s foremost ocean rowers, Turkish-born Erden Eruç launched from Crescent City and made it to Hawaii in 80 days, continuing on to Guam and the Philippines.

Australian Heather Taylor made it 40 days in a journey from Monterey to Hawaii, but similarly to Derreumaux had to be rescued amid choppy surf.

The pandemic really fired up these extreme adventurers, with a total of 19 people who made attempts to row across the Pacific last summer, including a group doing the Great Pacific Race — which Derreumaux participated in back in 2016 and completed a row from SF to Hawaii with a crew of four in 39 days.

Before Eruc successfully made it to Hawaii, only one man had completed a California-to-Hawaii row, and that was El Gillet in 1987 — in a store-bought kayak with the help of a propulsion kite. He made the trek in 63 days.

The Pacific is notoriously rougher and more unpredictable than the Atlantic, which has seen many more of these solo rows over the years. But it being the “less rowed ocean,” as one rower put it, it’s become an attractive accomplishment to try to get to Hawaii.

We’ll see if this summer sees a similarly high number of attempts as last year.