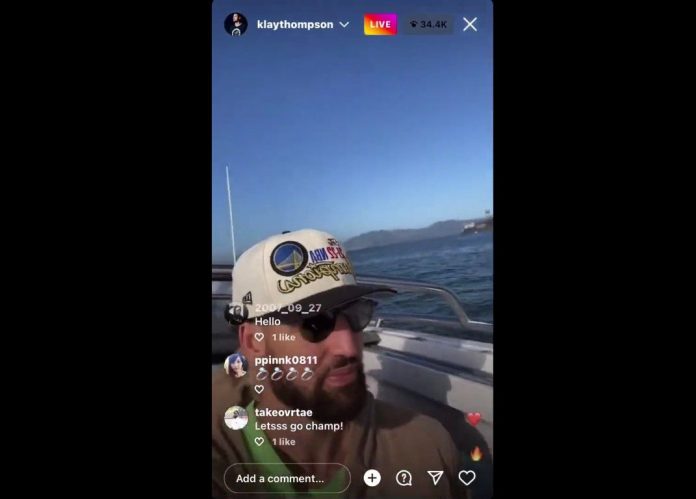 It’s hats off to your Golden State Warriors for their championship parade today, but Klay Thompson saw his 2022 championship hat fly into the Bay Monday morning as his yacht rocked to the parade.

Traffic is predictably a mess in downtown San Francisco as enormous crowds gather for the Golden State Warriors championship parade, so people are urged to take public transit. Unless you are a basketball player on a $190 million contract who has a $100,000 boat, but even then, there are risks.

As seen in the video above that numerous sports blogs have embedded, Thompson had his championship ball cap fly off his head and into the bay, while streaming his Monday morning boat ride on Instagram Live.

We have slightly more detail in this version seen above, complete with comments from users like “420ajay420.” Thompson looks to his camera and says “Beautiful day out in the ocean, yo,” then promptly has his hat fly off, exclaiming, “No! That hurts.”

Sea Captain Klay rolling up to the parade ⚓

Thompson is able to replace this with a yacht captain’s hat that he has on board, a likely nod the the Giants’ Brandon Belt  “captain” running joke. But Thompson is clearly still upset over the loss of his Warriors championship ball cap, which by the way retails for a mere $38.99.

Last we knew, Klay Thompson was still donning the captain’s hat, but we will continue to monitor the situation with Thompson’s chapeau.

Good thing he didn't lose any of those rings. https://t.co/rnZw8dpwXr

We’ll also monitor whether Klay Thompson’s look alike impersonator shows up today. For while that fellow is banned for life from the Chase Center, the Kay impersonator would probably be received pretty well anywhere else in town today.