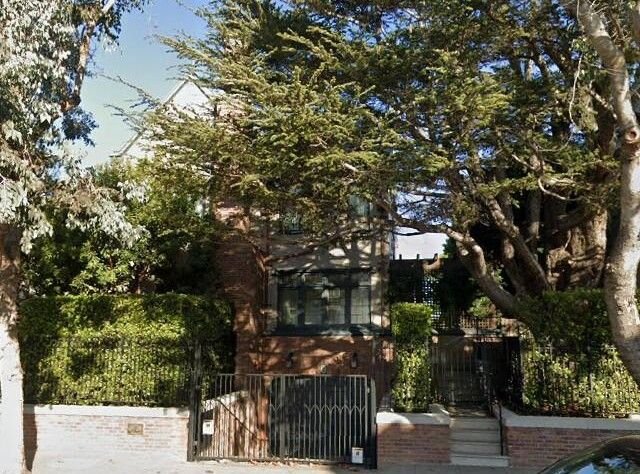 Mark Zuckerberg Has Sold His Dolores Heights Home After 10 Years

The neighbors must be thrilled that the Chan-Zuckerbergs have unloaded their Dolores Heights area home for a reported $31 million, but Google Maps has blurred the residence, because Big Tech does respect certain people’s privacy.

It has been about 10 years since Silicon Valley boy-king hipster Mark Zuckerberg was occasionally spotted picnicking in Dolores Park, and by October 2012, the Facebook founder had bought a house on 21st Street just blocks from the park. He and his new bride Priscilla Chan wasted no time earning the utter contempt of their new neighbors, with Zuck’s massive security detail clogging the streets, the nonstop racket of his construction projects, and his paying people to bogart parking spaces for Zuck and his well-heeled entourage.

Well, the nightmare may be over for the rich, but not-rich-as-Zuckerberg individuals of means on that particular charmed stretch of 21st Street. Celebrity real estate blog The Real Deal reports that Zuckerberg and Chan have sold that house for a reported $31 million, according to city records dated July 1, 2022.

Checking the address on Google Street View, you’ll notice the household is obscured by a force field of blur. This is something you can request, but it’s not automated, Google reviews the requests and considers whether to grant them. It’s probably helpful to be a rich-kid founder type. Still, there’s an automated bot account on Twitter called @everylotsf that has a pre-blur image of the Zuckerberg house, posted in May 2021 and clearly from Google Maps, though it is unclear when the image was snapped.

We don’t normally post people’s home addresses here on SFist, but in this case, the buyer has set up a shell LLC that literally names the address. “The buyer for the Zuckerberg property is 3450 21st Street LLC, according to the deed, which is the address of the 1928 home,” The Real Deal reports. “The buyer’s LLC is based in Delaware and paperwork for the home’s transfer was sent to Michael Gordon, a Delaware attorney who specializes in trusts and estate planning, according to his firm’s website.”

The Shultz properties were of course condos, not freestanding houses like this one. Zuckerberg bought the house in 2012 for a reported $10 million, so a $31 million sale is impressive, though he obviously put a few dollars into the place — including, reportedly, a roof deck from which you can probably see Dolores Park and much of the city.

Wake the Zuck Up! Zuck sold out democracy. Don’t sell my private data. Those are some of the phrases written in chalk outside of Zuckerberg’s house in SF. pic.twitter.com/40ncJJRbmx

But gone are the days of protests at Zuckerberg’s house, at least here in San Francisco, apparently. After all, the specific address of the residence became public when the Chronicle published pictures of the house in 2016, and frankly, it’s pretty rich for Mark Zuckerberg to fret about invasions of someone’s privacy.

Some may complain that we’ve gone and driven off Mark Zuckerberg and whatever tex revenue he represents, but he has long split his time between other homes in Palo Alto, Lake Tahoe, and Hawaii. And knowing Zuckerberg, on paper he is probably listed as living in Ireland in some sort of “double Irish” tax dodge.

Facebook
Twitter
Pinterest
WhatsApp
Previous articleAmazon Buying Up SF-Based One Medical for a Reported $3.9 Billion
Next articleZuckerberg Reportedly Getting Increasingly Snippy and ‘Intense’ In Pivot to Metaverse, Amidst Declining Profits