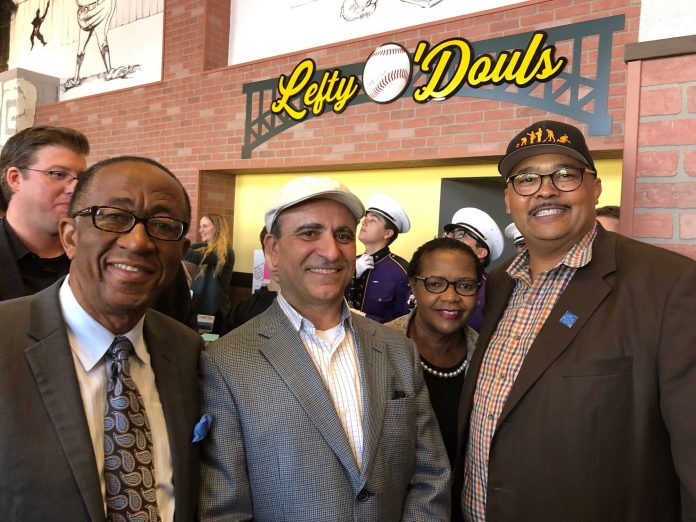 Disgraced former SF Public Works Director Mohammed Nuru was sentenced to seven years in prison Thursday afternoon, with prosecutors saying, “Mr. Nuru can still be Mr. Clean on the outside” but “deeply corrupt on the inside.”

There are probably still many more shoes to drop in the FBI public corruption probe of former SF Public Works director Mohammed Nuru, which came ro light two and a half years ago starting with steering city contracts to a bar owner he was friends with, then spread to Recology bribes, and also took down a laundry list of City Hall officials over Nuru’s doling out of city contracts in exchange for gifts and favors. Nuru took a plea deal in December and pled guilty to fraud weeks later, with federal prosecutors seeking a nine-year prison term and calling him a “quintessential grifter.”

But the big Lefty O’Doul’s hand-carved enchilada was Nuru’s sentencing, scheduled for today in a U.S. District Court in San Francisco. And U.S. District Court Judge William Orrick sentenced Nuru to seven years in prison, according to KQED, plus “three years of supervised release.”

The sentence is a rejection of Nuru’s team’s request for a more lenient three-year sentence, plus the forfeiture of his ranch in Colusa County. Nuru got a longer seven-year sentence, and must still forfeit the ranch.

Nuru has to pay $35k fine today and FORFEITS his 20 acre ranch with custom home in Stonybrook, CA.

Nuru was able to pack the house with family members, supporters, and former colleagues Tuesday afternoon. But this was not a jury trial, and there was no guarantee any of that would sway Judge Orrick.

Full house. People standing in the aisle to support Nuru. US Attorney says once he tipped off other targets of investigation, he did not cooperate further. “Obstruction is the exact opposite of cooperation.

The Chronicle reports that “more than 100 family members, friends, Public Works employees, mentees and former colleagues who sent letters on Nuru’s behalf, praising his dedication as [a] single father and his work developing community gardens in Oakland and San Francisco.”

This did not affect Orrick’s sentencing. “If what you had done was a one-off occurrence, I would absolutely agree the leniency was called for,” Orrick said, according to KQED. “But you made the city’s decision-making and competitive bidding a farce.”

“By awarding [contractors] and favoring them in exchange for money, gifts, trips, a job for your son and construction for a home, a vacation home, what you’ve done is to question the fairness of every matter, every decision you made at DPW,” Orrick continued. “During my time on the bench, I’ve sentenced people for really horrible things, gang murders, and really deadly stuff. In many ways, what you’ve done is at least as reprehensible.”

“Mr. Nuru can still be Mr. Clean on the outside, his nickname, and still be deeply corrupt on the inside.” — Prosecutor

Referencing Nuru’s longtime Twitter handle “Mr. Clean,” federal prosecutors told Judge Orrick, “Mr. Nuru can still be Mr. Clean on the outside, his nickname, and still be deeply corrupt on the inside.”

The Chronicle provides a few examples. “Over a twelve year period from 2008 to 2020, Nuru exchanged preferential treatment and confidential bidding information for international trips, jewelry, high-end wine, envelopes of cash, kitchen appliances and construction work on his ranch in Colusa County, a sprawling home that Nuru partly financed with laundered bribes.”

“Chief among these bribes was $260,000 in construction work on the ranch from businessman Walter Wong,” that paper adds, “a John Deere tractor and attachments from Balmore Hernandez, Alan Varela and William Gilmartin; a $36,550 gold Rolex watch from businesswoman Florence Kong, and an annual $150,000 donation from the city’s garbage contractor, Recology, which Nuru split between a Public Works anti-litter campaign and a personal slush fund.”

Hundreds of ⁦@sfpublicworks⁩ staff enjoyed the Giants game tonight and received a thank you from me, which hopefully lightened the loss to LA. pic.twitter.com/svYeleWLHJ

This may feel like the end of the Mohammed Nuru scandal saga, but it probably is not the end of the larger public corruption fallout. (Will it nail Mayor Breed again? She was already hit with ethics fines over taking gifts from Nuru, took the gift of a Pride parade float from a Nuru co-conspirator, and of course, admitted a romantic involvement with Nuru, claiming it was “two decades ago.”)

#BREAKING: Former San Francisco City Hall public official, Mohammed Nuru, was sentenced to 7 years in prison for a long-running scheme involving multiple bribes and kickbacks during his tenure as the city’s Department of Public Works director. The #FBI investigation is ongoing. pic.twitter.com/Rbvmx5OETn

But Breed is just one person in this scandal’s all-star cast, and as the FBI intriguingly notes above, “The #FBI investigation is ongoing.” We still have former Public Utilities Commission chiefs, local real estate magnates, and former DBI inspectors facing indictments and possible time behind bars. (And who is this unnamed “prominent developer” behind an additional $20,000 bribe? We don’t know but I bet you the FBI does.) Who knows what additional information these folks might disclose in hopes of  avoiding, say, seven years in prison and the loss of their fancy ranch.