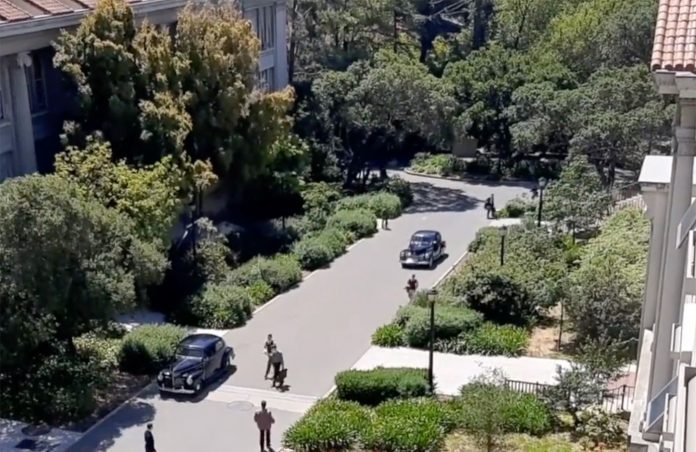 Director Christopher Nolan (Inception, The Dark Knight) and the cast and crew of the in-production film Oppenheimer were on the UC Berkeley campus Friday, filming some exterior shots with vintage cars from the early 1940s.

As SFGate reports, the film is based on the Pulitzer Prize-winning 2005 biography American Prometheus: The Triumph and Tragedy of J. Robert Oppenheimer, and it stars Cillian Murphy as Oppenheimer. Oppenheimer taught physics at UC Berkeley from 1929 to 1943, and his office was in LeConte Hall. After that, he left for Los Alamos National Laboratory to work on the top-secret Manhattan Project, developing the atomic bomb.

Nolan and his crew filmed for much of the day on Friday near the Valley Life Sciences Building, on Campanile Way, and at LeConte Hall, as SFGate reports.

People on campus posted photos to Twitter of the Hollywood happenings, which included concealing modern street signs with potted plants, and covering over the campus’s trash and recycling bins with wooden shed structures.

Some Props and Trailers from the #Oppenheimer movie! (UC Berkeley Campus, May 19th/20th) 📸: me; @mirazdecker. pic.twitter.com/eNi9eMsujE

Christopher Nolan filming #Oppenheimer outside my office at UC Berkeley. Or, my window is a time machine and it's showing me 1942. So, it's either physicist Robert Oppenheimer or actor #CillianMurphy who gets out of a car and walks into the physics building. pic.twitter.com/rmZq2Oqw67

#CillianMurphy on set of #ChristopherNolan’s #Oppenheimer in UC Berkeley, yesterday.
I hope we get some better quality and closer pics! 🙏🏻 ♥️ pic.twitter.com/TsD2OsJAMY

Filming on the campus wrapped up by Saturday, and the cast and crew presumably headed back to LA.