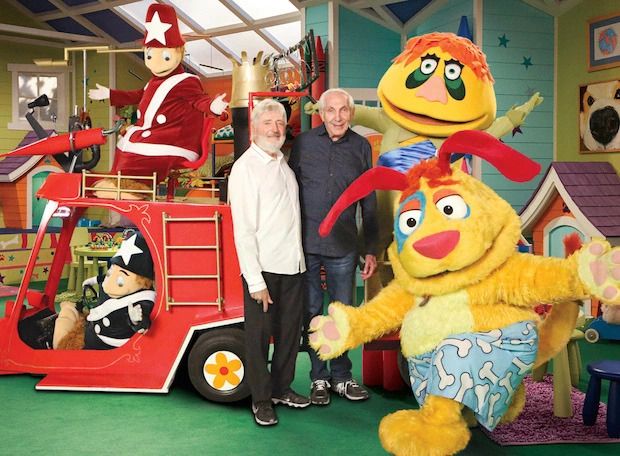 Sid and Marty Kroftt themselves will be on hand in the East Bay this weekend, with cosplayers competing for cash prizes, in a celebration of retro TV shows like H.R. Pufnstuf and  Land of the Lost that will be anything but a routine expedition.

Children of the 1970s will recall that there was no finer time of week than Saturday morning, when you’d park in front of the TV set hours before your parents would awake and indulge in a series of psychedelic live-action, large-headed puppet shows like H.R. Pufnstuf, Land of the Lost, The Bugaloos, and Electra Woman and Dyna Girl. These were the creations of Banana Splits veterans and sibling duo Sid and Marty Kroftt, who are both very much alive, and will both very much be at the historic Orinda Theatre on Saturday for Krofft Kon, a celebration of all things Sid and Marty Kroftt.

Are you ready! The first ever KROFFT KON arrives tomorrow! We are so excited!

“Come meet your favorite stars that you watched each Saturday morning while eating a bowl of cereal from your TV tray. (yes, cereal will be served),” the event says in a release. “The day will include episodes, Q & As, lectures, costume contest, trivia games and allow you to meet the stars from your favorite Krofft shows.”

Yes yes there will be celebrities from yesteryear and such, but obviously the 8 p.m. costume contest is going to be the marquee event of this convention. There will indeed be cash prizes, with $200 going to the winner, $100 for second place, and $50 for third place. Though as organizers note, “Costume must be made and not store bought.”

You may not recognize the names of the celebrities who’ll be there in person, but if you’re of a certain age you sure will remember their characters. These include Wesley Eure, Kathy Coleman and Sharon Baird (Land of the Lost), Johnny Whitaker (Sigmund and the Sea Monsters), Butch Patrick (Lidsville), and Ellis Joy (The Bugaloos).

The evening culminates with a screening of the 1970 feature film Pufnstuf. Mama Cass Elliot is in it!

Facebook
Twitter
Pinterest
WhatsApp
Previous articlePortola, a New Two-Day EDM Festival From the Coachella People, Comes to SF’s Pier 80 This September
Next articleNew Movie About Robert Oppenheimer and the A-Bomb Shot On Location at UC Berkeley on Friday