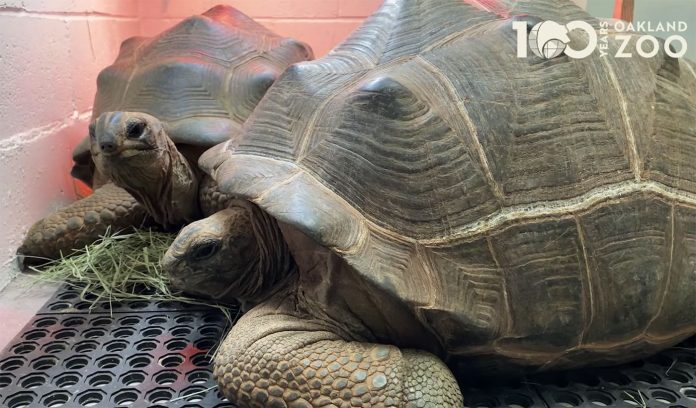 The Oakland Zoo has just welcomed a pair of Aldabra tortoises, both teenage males, and both confiscated from a roadside zoo in Oklahoma.

If you watched Joe Exotic you got a taste of Oklahoma roadside zoo culture. And the new Peacock series Joe vs. Carole brings us back to those scenes again.

Both of the Aldabra tortoises rescued were neglected and malnourished, the zoo says.

“Oakland Zoo is no stranger to taking in rescues from the illegal wildlife trade. The vast majority of our animal residents are rescues, and many of those rescues were victims of this multi-billion-dollar industry,” the zoo said on Facebook.

These two teenage tortoises will join six Aldabra tortoises that already share a half-acre habitat at the Oakland Zoo — after they’ve been quarantined and been thoroughly checked out by zoo veterinarians, that is.

Aldabra giant tortoises are native to the Aldabra Atoll in the Seychelles, and they can live to be over 120 years old and grow to up to 550 pounds. They were likely one of many Indian Ocean giant tortoise species, but others were likely driven to extinction by European hunting and poaching. At least one Aldabra tortoise has been documented to have lived 255 years — the tortoise, named Adwaita, was a gift to the Kolkata Zoo in 1875, reportedly at the age of 125, and he lived until 2006.