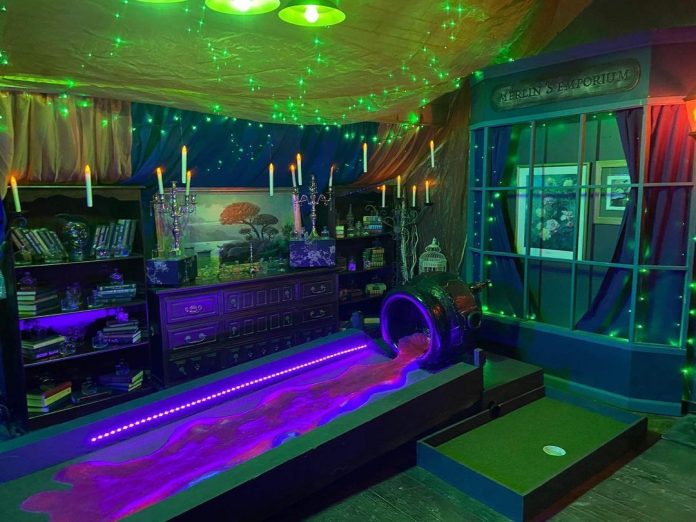 San Francisco has no shortage of pop-up events to attend, but Potion Putt — which is currently occupying the indoor space at SVN West in SoMa — has brought something novel to the city: a reimagining of mini-golf with a magical twist.

Themed cocktail bars and immersive art exhibits have grown into predictable, albeit temporary, norms in San Francisco. As the city continues recovering from the pandemic, such installations and events will inevitably continue on with a similar, maybe even at an accelerated, pace as the year matures. But of the many pop-ups that have come to SF as of late, Potion Putt’s present run inside SVN West (the former Honda dealership at Van Ness and Market) is one of the more unique options, offering not only nine “wizardly” courses, but a host of refreshments, foods, and decorations that would give Hogwarts a run for its money.

Opened to the public on March 4, Potion Putt has been conjured up by Hidden San Francisco, which, per Mercury News, is part of an international marketplace that stages “one-of-a-kind events and pop-up celebrations.” Potion Putt recently had a successful run in Denver, as well.

With unmistakable nods to J.K. Rowling’s magical literary oeuvre, each course has a specific theme that reflects some corner of a copyright-free supernatural world. For example, you’ll visit Merlin’s Emporium, where you’ll need to avoid putting into a cauldron containing some sort of potion. In another room, you’ll putt amid the glow of artificial candlelight and sturdy castle turrets. Then there’s a giant spider — which is lit up from behind in deep purple lights, no less — golfers must maneuver around. And no pop-up event worth its weight in pink Himalayan sea salt would be complete without a selfie station, of course.

Complementing this realm-bending mini-golf installation, Potion Putt also has themed libations, including “cauldron cocktails, butterscotch beer, and a few magical mocktails” for those looking to indulge, with or without the addition of alcohol. Though the course is deemed family-friendly, anyone younger than 21 will need to surrender their sorcery powers by 5 p.m. and return to the non-magical realities outside SVN West.

// Tickets($10-$18) can be purchased ahead of time at bucketlisters.com; proof of vaccination against COVID-19 is quired for all patrons eligible to receive the shot; face masks are suggested.