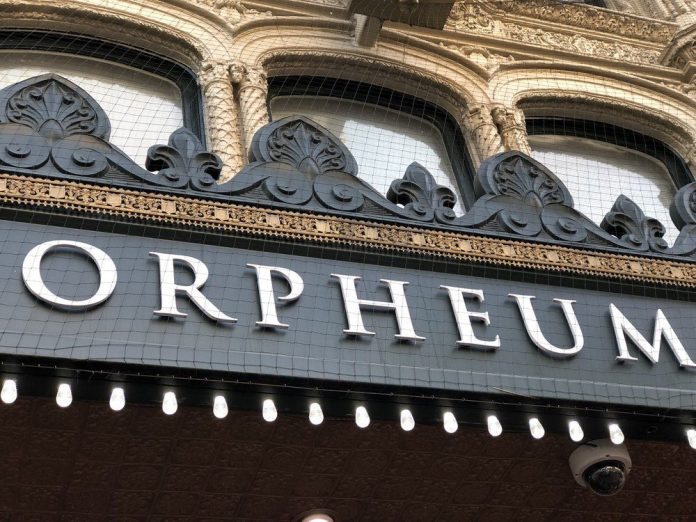 Orpheum Theatre Getting a Remodel, With an On-Site VIP ‘Admission-Only Club’

The latest new investment in downtown San Francisco is the Orpheum Theatre’s half-million dollar remodel, which will feature the new Marquee Lounge, a food-and-cocktails private club you can get access to for an extra $95.

There has not been much happening thus far in 2022 at Market Street’s Orpheum Theatre, which has not had any shows since Rent closed in December. But with Omicron appearing to have blown over and a general sense that we can better iterate on Hot Vaxx Summer this year, the Orpheum has upcoming runs with 2019 Best Musical Tony-winner Hadestown (June 7-July 3), a one-night Pink Floyd laser light show All That’s to Come (August 11), and the most recent Best Musical winner at the Tonys Moulin Rouge! The Musical (September 7-November 8).

But there’s been plenty going on behind the scenes at the Orpheum Theatre over the last year or so, some of which you can check out if you go to Moulin Rouge! The Musical. Th theater was sold along with the Golden Gate Theatre Britain’s Ambassador Theatre Group (ATG). And now the San Francisco Business Times reports that group is renovating the Orpheum with new amenities, including on-site VIP area “admission-only club” called the Marquee Lounge.

Love Broadway shows? The Orpheum Theatre is getting some improvements. https://t.co/BjxQePJ2gv

The Business Times explains that “Guests interested in the add-on experience will pay $95 per person for access to the lounge, available before and after the show. The space, with a total capacity of 58, will feature bar service, complementary cocktails and food, private bathrooms and a coat check.”

The above screenshot is from Broadway SF’s Marquee Lounge website, and mind you, the images are from a theater in New York City (SF’s version is still under construction). But the fine print is a little clearer on their website. The lounge won’t open until September’s Moulin Rouge! run, but once open, patrons get a “Complementary welcome drink,” plus “Dedicated bar service, specialty cocktails, and lounge seating,” and “Complimentary small bites and snacks.” Also the coat check and the private restrooms, if that does anything for you.

“The show is only part of an entertainment experience,” ATG managing director Rainier Koeners told the Business Times. “We want the entire experience of coming to our theatres to be an event before, during and after.”

This is certainly another win for the mid-Market neighborhood (Will people actually start calling it “Theater District?”), which despite its reputation, has recently added a Whole Foods, has an IKEA mall under construction, and is the hot new residential destination for half-million-dollar studios with beds that drop from ceilings. If investors are betting on mid-Market in San Francisco, I will gladly go spend my money there just to prove our right-wing critics wrong.

But this is about more than just San Francisco, this is a live theater industry looking to recover from two lost years. They’re trying to throw the old “dinner, drinks, and a show” concept under one roof instead of three, or to put it more bluntly, to get more people in their theater spending  more money. Theater is not the only industry that’s going to have to reinvent a few things to get its old fiscal groove back, but it is one industry with pent-up demand to exploit.

So if you’re offering me a “Complementary welcome drink,” and “small bites and snacks” for an extra $95 a pop on a fancy date night… Yeah, I might bite.

Related: Meet The People Who Camped Out Overnight For Hamilton Tickets [SFist]