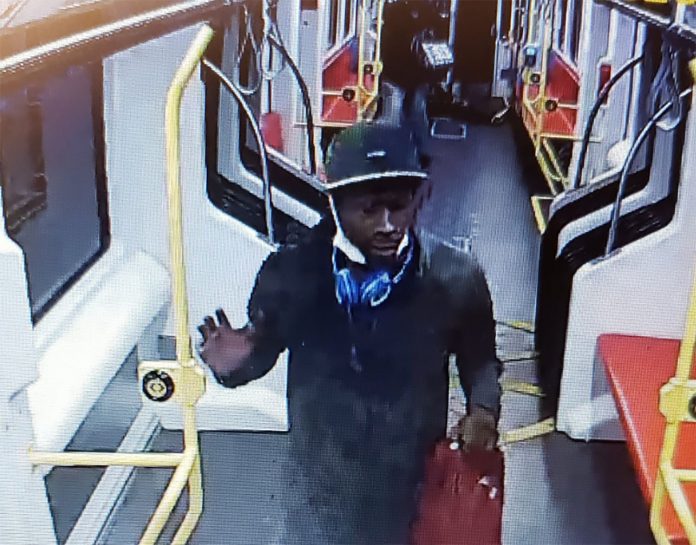 Photo of Person of Interest Released In Castro Muni Shooting

The SFPD released a photo of a person of interest Wednesday night in the fatal shooting on board a Muni train bound for Castro Station that occurred Wednesday morning.

Police have described the suspected shooter, who remains at large, as wearing dark clothing and a hooded jacket when he fled Castro Station. The person of interest whose photo was released is a male wearing a black t-shirt and black ball cap, with blue headphones around his neck and carrying a red backpack.

The person of interest is wanted for questioning about the shooting, and is seen in Muni surveillance images that are apparently from around the time of the shooting Wednesday morning.

Investigators have obtained video of the incident. The SFPD is releasing a still photo of the video, which is an image of a person of interest. The SFPD is asking this person to come forward and speak with investigators pic.twitter.com/9lmudSgtJW

No arrests have been made in the case.

As we learned previously, the shooting reportedly followed an argument or altercation between two men on board a Muni light-rail train that was traveling between Forest Hill and Castro stations.

The victim, as the Chronicle later reported, was a 27-year-old male. A second victim, first described as a 70-year-old man, was an innocent bystander who was injured by a stray bullet and suffered non-life-threatening injuries, per KTVU. Witnesses reported hearing three or four shots ring out.

The Chronicle, in its reporting, refers to both a female victim being shot in the knee, and a 70-year-old man being transported to a hospital with non-lethal injuries — but this is the only report that has mentioned a female victim.

The SFPD almost immediately after the shooting sought to distance the incident from this weekend’s Pride festivities, saying there appeared to be no direct connection to the Castro neighborhood or the city’s LGBTQ community. And it did appear to be an isolated incident involving two individuals.

Anyone with information on the case or the person of interest is asked to call the SFPDs tip line at 415-575-4444 or text a tip to TIP411 and begin the text message with “SFPD.”

Update: Also on Thursday, the Medical Examiner’s Office released the name of the 27-year-old man who was killed. His name was Nesta Bowen, and the Chronicle spoke to his father, who said that Bowen was born in Oakland but had grown up mostly in Stockton. “He loved art and making music,” his father said, adding that his tragic death was “heartbreaking.”