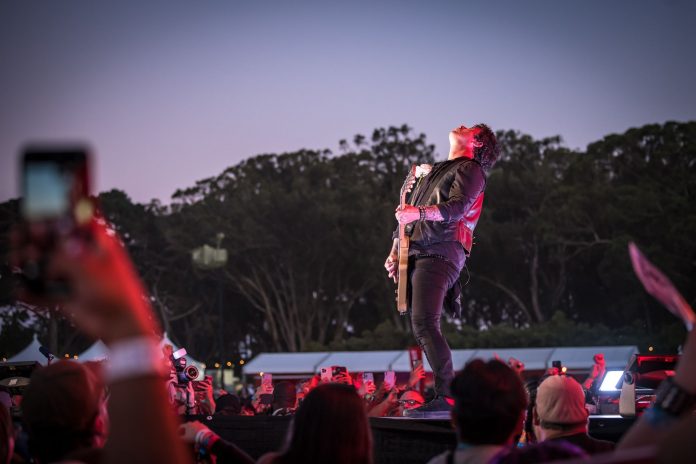 Outside Lands continued on with, more or less, the same cadence it had fallen into Friday… albeit punctuated with less outright excitement. The same young-skewing crowd again flooded the Golden Gate Park Polo Field with enough frilled garments to collectively moonlight as a drive-thru car wash. Costumes — many of those pulling inspiration from animated pop culture references to Buzz Lightyear and Pokemon — offered contrast to the looks donned by a sea of twentysomethings who pulled style choices from recent TikTok trends.

Mayor Breed was also on festival grounds yesterday; she was whizzing around in a chauffeured golf court.

ranger dave knows the early bird catches some amazing artists at outside lands!

Amid the day’s gorgeous weather, an early high point was climbed when the punk rock quartet The Linda Lindas took the Lands End stage just after noon. Hailing from Los Angeles, the all-girl group — comprised of Bela Salazar, Eloise Wong, Lucia de la Garza, and Mila de la Garza — rose to the zenith of social media fame when they performed their screaming, crunching power chords in the middle of the stacks of the Los Angeles Public Library in 2021 to widespread acclaim. (It was that universal praise that eventually helped them score a record deal… and mind you: no one in the group has entered into teenage adolescence yet.)

The rest of the afternoon’s performances were played to mostly unaffected, unmoved crowds. (I’m not sure why Saturday’s overall vibe sat a much lower wavelength than what was observed a day prior — maybe it was a result of Jack Harlow proving to be the day’s second-biggest draw behind Green Day — but it was tangible when crisscrossing between Sutro Towers and Lands End.)

That said: Local Natives, another festival act with SoCal roots, glowed as they ran through songs from their fourth full-length, VIOLET STREET, and their 2013 breakthrough record Hummingbird.

Kali Uchis, whose all-white costuming and like-dressed backup dancers offered an ethereal addition to Saturday’s roster, experienced some technical difficulties. According to SFGate, she “couldn’t hear anything through her in-ear monitor,” which later prompted her to quickly exit the stage and replace the unit with one that worked. Regardless of that hiccup, Uchis’ set was soaked with sensuality, raw talent, and pink stage lighting that accentuated the choreography.

To the booming sound of drums, Green Day made no time in turning up the volume to eleven Saturday night. The East Bay pop-punk band began an over 90-minute set with “American Idiot” at around 8 p.m. last night; the lighting design for the act also utilized fixtures located on the perimeter of the Polo Field, giving the performance an all-encompassing feeling from start to finish.

“Boulevard of Broken Dreams” elicited a muffled sing-along from the crowd that consumed any available standing or sitting space within the inset greenspace. It was somewhat wild thinking that a sizeable number of those present as the band ran through hits — and poignant backdrop displays, which included “Fuck You, Ted Cruz”  at one point — were single-digit-ages when some of these songs graced radio stations. Or they hadn’t yet even been conceived.

Update: I can hear Green Day from my house! https://t.co/UGjO9csJML

But with a rousing performance that echoed across San Francisco, many residents noting on Twitter they could hear the band’s performance miles away from the Lands End stage, Green Day didn’t disappoint. If anything, the band enchanted an otherwise unmagical festival day that was merely populated by fits of notable captivations.

For those looking to relive or get a glimpse into yesterday’s lukewarm festival happening — barring a few exceptions — scroll through some of our favorite pictures taken, below:

Related: Photos: Day One of Outside Lands 2022 Sees SZA Shine… and a Young-Skewing Crowd Descend on Golden Gate Park