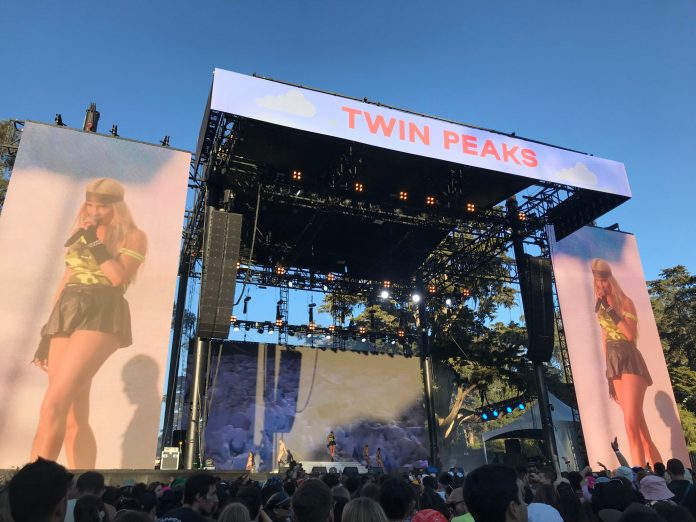 Coming off a sort of lackluster Saturday lineup, the final — extremely sunny — day of Outside Lands 2022 closed out the beloved Bay Area music festival with radiant performances from the likes of Amber Mark, Kim Petras, and Mitski, as well as a surprisingly decent set by Post Malone.

Arriving at the Golden Gate Polo Field Sunday afternoon was an exercise in expectation setting amid growing frustrations. Over the past two days, the majority of the youthful crowd came off shockingly rude, pretentious, and left attendees over the age of 30 years old wondering how so many of them could afford $409 three-day festival passes during a time of record-high rates of inflation. And, in some instances, physically painful. (I was smacked no less than three times by half-empty aluminum water bottles flailing on the arms of passing youths.)

Alas, for me, the bar was set low Sunday, but yesterday’s final sets for Outside Lands 2022 pulled moods up as many of the day’s smaller sets brought Big Headliner Energies to the festival grounds. And yet again the weather was unseasonably warm and perfect throughout the afternoon — this was probably the first Outside Lands ever in the festival’s history with three very sunny days in a row.

Amber Mark was luminous in an early set on the Lands End Stage, singing hits and new material to a decent-sized cohort of fans.

Pusha T’s kinetic, in-control stage presence was undeniable when he walked onto Lands End around 4 p.m. Sunday, glowing in the transparent sky and warm weather that graced the festival again. As clear as Pusha T’s talent — his lyrical skill sets on full display as he ran through songs from his newest album, It’s Almost Friday, which followed the release of his 2018 Grammy-nominated LP Daytona — was the fact that Karl The Fog took most of the weekend off.

Being in the presence of Nadya Tolokonnikova (a.k.a. Pussy Riot), whose set time began a mere ten minutes after Pusha T’s, reminds you of the excellence that exists at the intersection of strong convictions and unshakable confidence. With her legs traced with fishnets and wielding a pink-dyed leather whip like an extension of her own body, the activist-turned-artist-and-author mused and delighted an attentive crowd throughout her 40-minute performance.

With the sunlight starting to wane, Sunday’s most-hyped acts began taking place at Outside Lands’ three biggest stages around 6:30 p.m.: Weezer, Mitski, and Kim Petras all went on around that time, followed the day’s main headliner, Post Malone.

To twist a lyric from Cher’s leading single off her 2013 album Closer to the Truth: “This [was] a woman’s [festival day].” And both Kim Petras and Mitski proved they were more than deserving of the larger Lands End stage space slotted for the two aforementioned male acts.

Petras came prepared; no one could say otherwise. One of the most visible trans artists in the world used every inch of the Twin Peaks Stage space to interact with the crowd.

Kim petras was incredible at outside lands pic.twitter.com/2sXZhXrQPV

“Holy shit, I fucking love you guys,” Petras said on multiple occasions… at one point holding back tears. Bangers from her most recent EP, Slut Pop, were sung to an outright queer-leaning crowd — who emphatically belted suggestive lyrics like “I’m the throat goat.”

And who knew that hearing Petras’s cover of Kate Bush’s “Running Up That Hill” could be such a cathartic experience?

The 29-year-old’s general bubbly, jovial nature was also evident… as was her humility.

“I know the album leaked, you guys,” she says to the audience in the wake of her most recent project becoming available online before its intended fall release. “You can listen to it. Singles are still coming out.”

Finally, #mitski takes the stage. She embodies her songs. She dramatizes the emotions. Saw her perform once before (2019) and she consistently has blown the crowd away. Can’t believe #outsidelands is over. What a way to go. 😢 #indierock #indiemusic pic.twitter.com/zFoobrTZKN

Mitski confirmed that Sad Girl Autumn tropes do, in fact, have a place in Hot Girl Summer timelines. Crooning through fan-favorites like “Love Me More,” the Japanese-born American singer-songwriter performative hand gestures — at one point miming herself slitting her own throat — were sponged up by a crowd hazed in cannabis smoke.

With just a microphone stand, flouncy blue dress, and towering vocals, Mitski cemented the notion that less is often more… so long as talent can fill the gaps.

While not as outright gripping as Green Day’s healing hold on the crowd the day prior, Weezer exuded a similar level of nostalgia. The SoCal-birthed quartet performed to an audience delighted to revisit adolescent angst — now as fully-fledged adults who navigate late-stage capitalism healthcare.

ranger dave likes you, @postmalone, he does! thanks for closing out outside lands 2022 like only you could

As for Post Malone? I was not expecting a lot. However, his flashing examples of vocal prowess did offer some surprising moments of pleasure; Malone’s use of orchestrated stage lighting and pyrotechnics proved equally triumphant.

That said… When the 27-year-old first took the stage and confidently proclaimed “I’ve come to play some shitty music,” he wasn’t fibbing (for the most part).

Outside Lands 2022 was a mouse sneeze to 2021’s lion roar. The first-ever Halloween Weekend Outside Lands Music Festival held last year echoed excellence at virtually every stage corner. The crowd, too, was leaps and bounds and miles ahead of this year’s in their energy and politeness — without question.

Will 2023’s OSL see the festival turn the corner and return to its well-rounded glory? Perhaps. Only time will tell.

But, if anything, at least whatever herd of humanity descends on the festival grounds then will experience a full year of maturation before filming TikToks in front of the general admission bathrooms.

Didn’t make it to Golden Gate Park yesterday or just want to relive Sunday’s high points? Scroll through some of our favorite pictures snagged yesterday, below:

Related: Photos: Day One of Outside Lands 2022 Sees SZA Shine… and a Young-Skewing Crowd Descend on Golden Gate Park