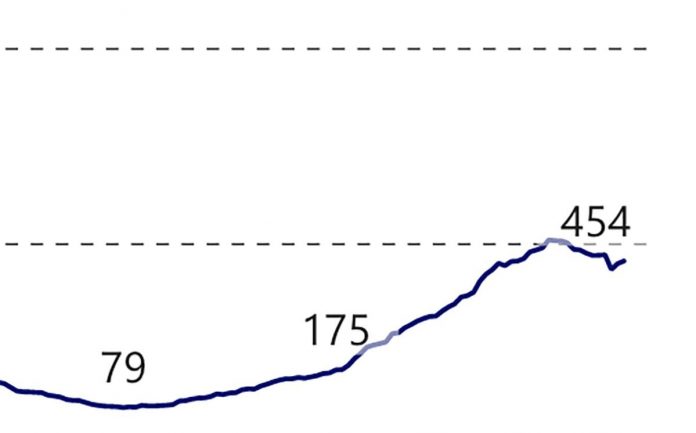 This latest Omicron-subvariant surge may have peaked in SF in the last week or so, as was predicted by infectious disease modeling. But the city’s rate of new COVID tests coming back positive was the highest it’s been since January.

San Francisco and the Peninsula counties of San Mateo and Santa Clara continue to be the COVID hotspots of the state of California — likely because of our vigilance up until this point, and now people with no natural immunity are catching the highly infectious Omicron subvariants going around. This surge has not resulted in a major spike in hospitalizations, so far, but one key metric remains exceedingly high for San Francisco, and that’s test-positivity.

As the Chronicle noted Thursday morning, SF’s test-positivity rate hit 12.6% as of last week, and may have risen to 14.6% as of Friday, though that data remains unreliable. These are the highest rates of test positivity since the pandemic peak we hit on January 9, which was 18.9%.

Far fewer people are getting official, lab-verified PCR tests right now though than they were in January, thanks to the abundance of at-home testing kits — and experts have suggested in recent weeks that SF’s high rate of test positivity is likely due to people going to get PCR tests as confirmation of positive at-home tests they’ve already taken, thereby skewing the sample of people getting tested through official channels.

See the charts below of SF’s test-positivity since January 1, versus the number of tests being administered.

The seven-day rolling average of new cases in San Francisco has been dropping over the last two weeks, from a high of 508 new cases on May 20 down to 304 on June 4.

While this is most certainly an undercount due to at-home testing that goes unreported, it at least seems to reflect a surge that is subsiding.

Across the Bay Area, the rate of weekly cases also appears to be subsiding.

Hospitalizations in the Bay Area fell by 3% on Wednesday, down to 765, but the number of patients in hospitals with COVID is still well above the low of 309 seen on April 15.

Still, one’s chances of dying from COVID continue to decline. The Bay Area has recorded 102 new deaths from COVID since May 1, which is still an average of 17 deaths per week, but well below levels seen in previous surges. And ICU numbers have remained relatively low.

The steady decline in COVID deaths is being seen worldwide.

It's not over, by any means, but the chances of dying from Covid keep declining👍 pic.twitter.com/6Bl6ULPeey

Meanwhile, plenty of people who have had COVID at least once before are getting again — and there is evidence to suggest that infections from the first Omicron variant, or any earlier variant, does not provide good immune defense against the BA.4 and BA.5 subvariants of Omicron that are starting to circulate.

Just out @SciImmunology
Post-vaccination breakthrough infections with Omicron BA.1 provide strong neutralizing activity vs BA.2 (and prior variants) but not vs BA.4/5https://t.co/EyBy7aaEps pic.twitter.com/RYhIAwUHj5

UCSF’s Dr. Monica Gandhi predicted two weeks ago that the current surge would be all but over by late June, based on modeling and what was seen on the East Coast earlier in the spring. And she predicted that by early June (now) we’d be seeing cases decline locally, which they appear to be doing.

We’ll see what the summer brings.

Related: Alameda County Opts to Require Masks Again In Most Indoor Settings — Is Anyone Really Listening?

Facebook
Twitter
Pinterest
WhatsApp
Previous articleThursday Morning What’s Up: Major BART Computer Failure Causes Delays
Next articleMandelman’s Shelter-for-All Plan Passes Board Unanimously, Though Many Are Skeptical It Will Do Anything