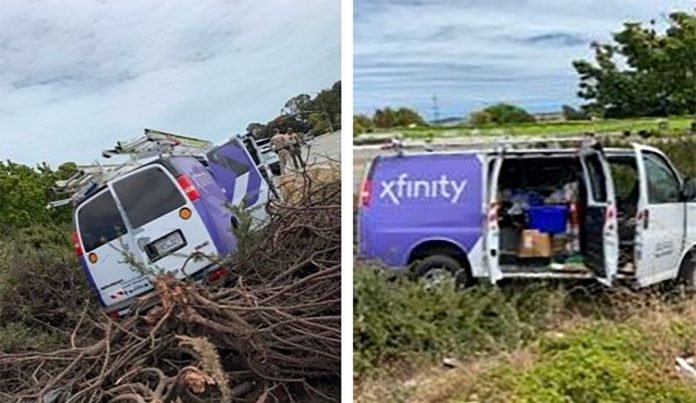 A San Francisco man was arrested on July 4th for allegedly trying to break into a home in San Rafael well posing as a Comcast technician, with the help of a uniform and a stolen Xfinity van.

You’ve heard about burglars who target the homes of people on vacation. Well, a homeowner in the Bret Harte subdivision of San Rafael called the Marin County Sheriff’s Office on Monday to report on a suspicious character in a Comcast uniform trying to get into their front door — as seen on their Ring doorbell camera.

“As Deputies arrived in the area, they found the garage door propped open with a ladder and a subject flee[ing] from inside the garage into a Comcast vehicle,” the sheriff’s office writes in a Facebook post. “The vehicle quickly fled the area with the Deputy giving chase.”

The Xfinity van led the deputy on a chase into Contra Costa County, where the suspect tried to take an offroading “shortcut,” tearing across a densely planted median from an off-ramp in Richmond.

“The vehicle became lodged in thick brush and the driver fled on foot,” the sheriff’s office writes.

With the help of a CHP helicopter, and a CHP unit located nearby, deputies were able to locate and arrest the suspect. He’s been identified as 30-year-old Tyler Christopher Ramirez.

Ramirez has been booked in the Marin County Jail on charges of burglary, possession of stolen property, evading arrest, and vehicle theft. Deputies believe Ramirez stole the Xfinity van and was posing as a Comcast employee — though it’s not clear if any other burglaries were committed.

Facebook
Twitter
Pinterest
WhatsApp
Previous articleOp-Ed: Why You Should Be Giving Your Money To Local Bars and Theater and Not These Fly-By-Night Theme Bar ‘Experiences’
Next articleDay Around the Bay: Feinstein Is Among the Dems Who Might Not End Filibuster for Abortion Rights