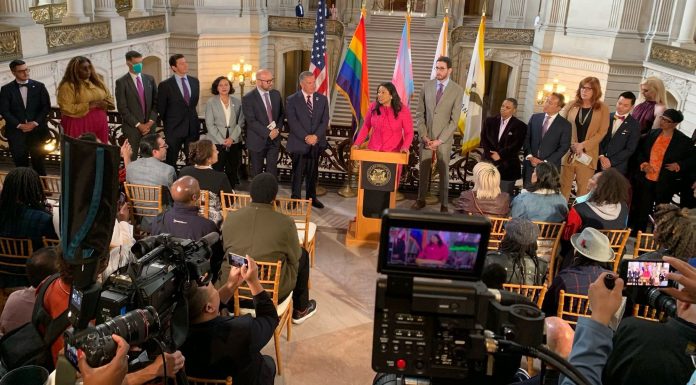 Turns out that recent compromise deal for police to march in the SF Pride parade was drawn up by a tech industry public relations firm that SF Pride hired for $4,000 a month, hoping to tell, in their words, a “fun and urgent story.”

There’s a running joke among journalists every year when Pride Month rolls around, as our inboxes fill up with corporate pandering, with promotions like a Burger King “Proud Whopper,” rainbow Listerine mouthwash, and goddamned rainbow Doritos. These emails, which beg us to hype their “limited edition!” Pride Month products, do not come from the companies like Burger King, Listerine, or Doritos themselves. Instead, they come from hired public relations firms typically headquartered in New York or Los Angeles, who see Pride Month as their sort of big-money jackpot “Christmas in June” where they draw up fat invoices to promote these queer-washing campaigns intended to make big corporations feel like they’re “allies.”

Yet one plucky tech public relations firm has apparently found a new and different revenue stream to milk for Pride Month. You’ll recall the recent eight-day mini-controversy where the SFPD declared they were boycotting the Pride parade over the ban on uniformed officers marching, and Mayor London Breed quickly declared she too would join the boycott. Barely a week later, SFPD and SF Pride announced a compromise deal that evidently satisfied all parties.

As the Chronicle reported at the time, “The deal came together Thursday morning as representatives from the mayor’s office, the SFPD Officers Pride Alliance and Pride gathered in [Supervisor Matt] Dorsey’s office to figure out a solution to a controversy.” The Chron added that “Talks also occurred Wednesday evening at a public forum on the topic at Manny’s” involving the SFPD Officers Pride Alliance and SF Pride interim Director Suzanne Ford.

Yet this account may have left out a key player. According to the public relations trade publications PR Week, a tech public relations firm named Bospar was hired to broker and promote the compromise deal.

“Bospar worked quickly. The PR agency started working with the San Francisco LGBT Pride Celebration Committee on June 1, and the agreement was published the next day,” according to PR Week. “Bospar counseled the client, led media outreach and crafted the compromise statement.”

San Francisco-based Bospar describes themselves as an “award-winning tech PR” firm. Their own press release calls them “the ‘politely pushy’ PR firm,” which probably means I am going to get a nasty email from them for not saying adequately complimentary things about them.

According to PR Week, Bospar was contacted two days after the whole police boycott brouhaha broke out. “The [SF Pride] organization reached out to Bospar on May 25 and said it was looking for a crisis comms person that it could have on-call,” the publication reports. They add that Bospar cofounder Curtis Sparrer “called his firm’s work with the organization a ‘labor of love.’ The group is paying Bospar $4,000 per month.”

Bospar’s co-founder Sparrer told PR Week that “Now that San Francisco Pride has turned the page, we are looking forward to telling the more fun and urgent story, because there are a ton of different laws targeting LGBTQIA people right now.”

The words “fun and urgent” might make you want to hurl, since it’s a seemingly glib turn of phrase given the horrifying rash of state-level anti-trans legislation that currently includes genital exams for children and child abuse charges against parents of trans kids. Many of these harsh penalties are enforced by, you guessed it, police.

Sparrer also noted that if this dispute were not resolved, “San Francisco Pride might suffer the same fate as Boston,” a city which dissolved its official Pride parade this year. But that almost feels like a protection-racket kind of threat, where if you don’t keep police happy, then it would be a real shame if any of your permit requests were denied. And maybe that is the new reality of big-money Pride celebrations in major U.S. cities. And if so, the public relations industry is figuring out how to monetize that new dynamic.