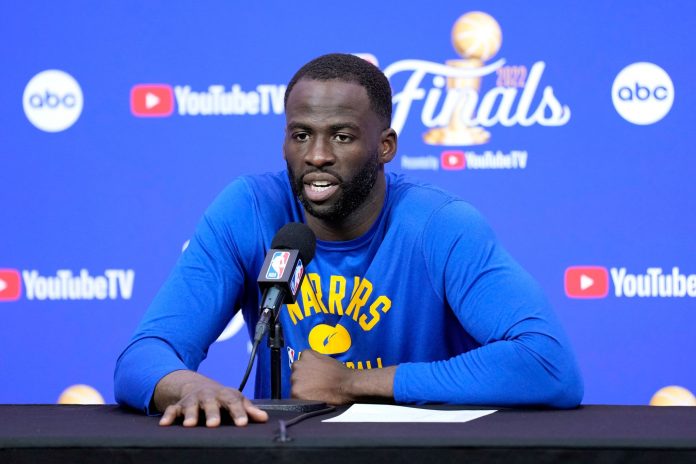 Following the Golden State Warriors’ loss to the Boston Celtics in Game 1 last Thursday, Associated Press NBA writer Tim Reynolds asked Draymond Green, “Why does noise still exist?” Reynolds mentioned that when Draymond was playing on the eventual gold-medal-winning US Olympic team and they’d lost a few early games, the media’s knee-jerk reaction was, “The sky is falling.”

“Why does noise exist after one game?” Reynolds repeated.

Can I take a stab at this one, Draymond? Noise exists because all of us — fans, reporters, players — are screaming at the top of our lungs. It’s joy when we win, heartbreak when we lose, and excitement and anxiety for the next game. Cue the $50+ billion sport’s media industry there to hear our impassioned cries, and amplify them back to us.

After the Warriors’ Game 1 loss, you might have heard that the sky was falling. “Everybody’s trying to guess what’s gonna happen in the series, overreacting — or properly reacting — to everything,” said Stephen Curry of the noise over the weekend. There has also been a clamor over Curry’s “legacy,” with some sports pundits calling his Finals’ performances kind of (I guess) mediocre. He’s never won the Finals’ MVP, they said. He’s not clutch, they said.

For ardent fans, it’s only natural to want to talk and talk and talk about sports. The game of basketball is so fast and fleeting, and there are hours and days to fill between games — especially now that we’re down to two teams. We analyze the game death, make endless comparisons to players, teams and seasons past, and prognostications about the future. Sure, it’s fun, but it’s also a beast whose appetite can never be sated.

The noise clots, and mutates into any number of narratives, which run the gamut from wholesome and inspiring to bat-shit crazy and infuriating.

Shhhh. Just, shhh. Listen to the silence for a moment. Breathe. (Photo by Ezra Shaw/Getty Images)

Sorry, Draymond, I interrupted, like, two paragraphs ago. To be clear, I am The Noise, too, one of a gazillion voices in cacophonous chatter, another writer scribbling a story during the down days of the NBA Finals, spreading noise by sharing links to stories that I am amusedly outraged over. The noise is infectious. You will be assimilated. Resistance is futile.

Why is there still noise?

“It’s the world we live in. Clickbait headlines, who can get the most views, who can say the most outlandish thing,” Draymond said. “That’s what makes this sport what it is, that’s what makes the revenues what they are.” (The global value of “sports media rights” was $52.1 billion in 2021, which includes sports journalism, broadcasting and production.)

Draymond said the noise was two-fold: “You have to be able to block the noise. It’s so wishy-washy. You can’t ride that wave; you can’t get caught up in who’s saying what. Then you’re an emotional wreck.

“But . . . There’s only noise when you’re great. Teams that didn’t make the playoffs, there is no noise — no one cares. As irritating as it can be, it’s ultimately what you want. It means someone cares.

“I think it’s kind of a compliment.”

Serious question: How much time do NBA players spend in front of the microphone? Surely, it vastly outweighs the time they spend on the floor. (I love it, and watch every minute.) Do other sports have as much sit-down-at-the-table media interaction as basketball? (Photo by Thearon W. Henderson/Getty Images)

The noise echoes, and sometimes what you hear may have been repeated a million times before you heard it. A narrative can easily be presented as fact.

Since his return in January, there has been endless speculation about whether Klay Thompson is truly “back to form.” I’ve heard numerous announcers and sports pundits say it, especially about Klay’s abilities on defense.

“Klay Thompson is not the same defender. I’m not so sure he’s ever going to be,” said Shannon Sharpe, cohost of Skip and Shannon: Undisputed, a few days before the Finals began. “You miss 1,000 days, you’re not the same.” Sharpe, and every other pundit to make this assertion, are asking a legitimate question about a player who’s suffered major injuries.

At what point, however, do we all start to repeat what someone else said?

On Sunday night in Game 2, Klay put his body in front of Jaylen Brown, who was about to deliver a poster dunk. It seemed like pretty good, non-fouling defense. If Klay makes X amount of those plays, or gathers other statistics, will he be “back” in the minds of analysts?

Klay Thompson was asked, “What do you tell Jordan Poole after a game like [Game 1]?” (JP had 9 points last Thursday, and never seemed to find any offensive flow.) “Turn off your phone,” Klay said. “Don’t watch television [or] sports media, because it’s very reactionary, and when you’re at the center of the sports’ universe, everyone has an opinion.” (Photo by Ezra Shaw/Getty Images)

“[It’s] been the same Klay that I’ve always battled with in the playoffs,” Draymond said a few weeks ago. “I think it’s pretty funny, the narrative around it. I hope he don’t believe that narrative, and it kind of sounds like he does to say, ‘I’m still working to get back.’ No. He back.”

I wonder if Shannon Sharpe, a former NFL player, has ever asked Klay about his recovery, or could say where his assessment of Thompson came from. How do you quantify Klay’s “backness,” Mr. Sharpe? Would you acknowledge your own susceptibility to repeating narratives?

In a tweet, Kevin Durant said, “My theory is that guys like Steve [A. Smith], Skip [Bayless] and Shannon have changed the game for the worse.” Oh, look at me now, writing about other people’s online feuds. (I said this was noise.)

Shhhhhhhh! Take another break from the racket. Breathe in. Breathe out. (Photo by Ezra Shaw/Getty Images)

There have been a few mind-numbing threads about Stephen Curry’s Finals’ performances — one Bay Area media outlet called it the “Steph Curry hot take industrial complex,” which is a hilarious characterization, but reporting on the industrial complex becomes a complex unto itself. Ecosystems of noise proliferate. (When one host said, “Steph’s legacy is secure,” I thought, Why are we talking about the “legacy” of an active player? It’s almost like writing someone’s obituary while they’re still alive.)

Skip Bayless made this assertion about Steph Curry’s legacy after Game 1:

“On the biggest stage in the biggest moment, Steph Curry displays no clutch gene. He shrinks and disappears,” Bayless said, tapping a pen on his desk for emphasis. “I see that the greatest shooter ever is the greatest until the stakes are highest.” I wonder if Bayless’s expectation is that some players make every shot and win every game? If so, that sounds totally boring. (Remember the movie Pleasantville, a story-book town where nothing ever went wrong, and no one ever missed a shot?)

I’m sure that Bayless and Sharpe would agree that it is the uncertainty, the fact that anything can happen, that we must all wait, breath held, as a shot travels through the air, to the basket, that makes the game so exciting. There is a simple, drama-filled binary of make or miss, of win or lose, of glory or heartache. There is no thrill to victory without the possibility of agony over defeat.

I respect the role that shows like Undisputed play. Just looking at the stat sheet, and not considering any number of X-factors, Bayless might have some kind of point about Steph, but he certainly has a good storyline that would be appealing to those who both agree and passionately disagree. I understand that writers and broadcasters say controversial things for the sake of controversy, because it’s entertainment, it’s shtick, it’s all part of the show. But if someone was emphatic about their “hot take,” if Skip Bayless is at cocktail parties trying to change hearts and minds about Steph’s non-clutchness, then that, to me, would be absurd.

“Does anyone here want to share their opinions about my ‘legacy?'” (Photo by Ezra Shaw/Getty Images)

“How much of the noise seeps through, how much does it affect you guys?” a reporter asked Steph Curry a few days ago.

“As much as you want it to. It comes with experience knowing the narratives change really quickly. It never really gets to me.”

“Do you use it as motivation?” the reporter asked.

“Yes and no,” Steph said. “It’s kind of a through-line of your entire career and every year that you play in this league and every experience you go through. It’s not just, ‘Oh, we’re in the Finals, I need some motivation to get the job done.'”

I never heard Curry say that he didn’t use the noise for motivation, and there is a, ahem, narrative that it’s wise not to make Steph mad. After all the pandemonium leading up to Game 1, he set a record for most threes in a quarter. After getting booed by fans at the All-Star Game in Cleveland, Steph made 16 three-pointers, scored 50 points, and won game MVP.

Use the noise at your discretion, faithful reader who has made to the end of this particular piece of clatter. It is an intoxicant to be taken with discretion and sound judgement. Don’t hit it too hard. Enjoy it, but please, don’t take it too seriously.