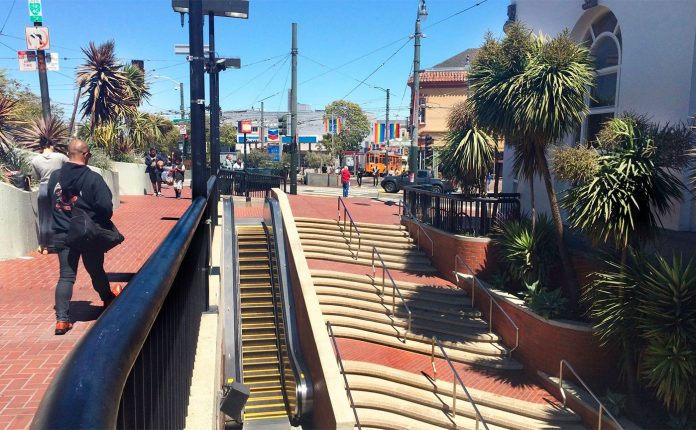 Police arrested 26-year-old Javon Green of Pittsburgh Thursday night for the Wednesday morning fatal shooting on Muni near the Castro Station, and we now know the victim was 27-year-old Nesta Bowen.

The Wednesday morning shooting on Muni, on a moving underground train between the Forest Hill and Castro Street Stations, was all captured on Muni surveillance video. That allowed SFPD to release a photo of a “person of interest” Thursday, and later in the day, the Medical Examiner’s office released the name of the victim in the fatal shooting, 27-year-old Nesta Bowen, seen below. “I’m just trying to collect my thoughts,” his father George Bowen told the Chronicle Thursday. “It’s heartbreaking.”

The San Francisco Medical Examiner has identified the man killed during a Muni shooting at the Castro station this week as 27-year-old Nesta Bowen. https://t.co/LYEfps1oHG

As of Thursday night, a suspect has been arrested who may also be that same person of interest shown the photos released earlier. According to a Friday morning update from the SFPD, police arrested 26-year-old Javon Green of Pittsburg, at his home.

Green and Bowen apparently knew one another, and the shooting is considered to be related to the dispute, not a random shooting.

SFPD just announced the arrest of Javon Green, 26, arrested last night in connection with the double shooting inside a Muni train that killed 1 and injured a bystander. Police say this was likely an “isolated” incident pic.twitter.com/is541azTW3

“On Thursday, June 23, 2022, at approximately 7:50 p.m. San Francisco Police officers and investigators served the search and arrest warrants on the 1000 block of Power Ave. in Pittsburg, CA,” the department said in their release. “With the assistance of the Pittsburg Police Department, the SFPD Tactical Team and additional SFPD resources the suspect was taken into custody without further incident. The suspect identified as 26-year-old male, Javon Green, was transported to San Francisco where he was booked on the arrest warrant “

Per SF Sheriff’s Office records, Green is currently being held on charges of homicide, carrying a concealed firearm, and using a firearm in the commission of a felony.

While Bowen died on the train from his gunshot wounds, there was another 70-year-old male victim who was taken to the hospital with “non-life-threatening injuries,” according to SFPD. The Chronicle and Supervisor Myrna Melgar both referenced a “female victim” who was “injured in the knee” in  the incident, but there aren’t any additional details on the possible third victim.

And since this occurred near the Castro, in the leadup to Pride weekend, and amidst an uptick in violence against the LGBTQ community, SFPD has repeatedly emphasized in each announcement that “that this incident appears to be isolated, and we do not believe it is related to Pride festivities or was targeting any group or community.”

Facebook
Twitter
Pinterest
WhatsApp
Previous articleFriday Morning Constitutional: Welp, Roe v. Wade Is Dead
Next articleTrump Himself Has Told Friends That Anti-Abortion Laws Are ‘So Stupid’ and That a Reversal of ‘Roe’ Would Hurt Republicans