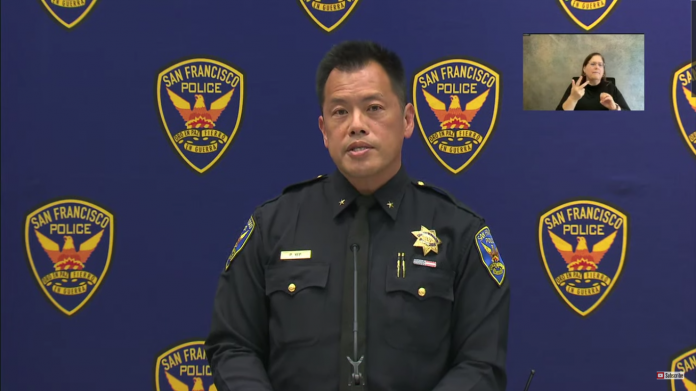 The police department is still not exactly saying who shot first in an August 6 shootout between officers and a suspected bike thief, but it turns out the suspect did not have a real gun.

Details were scarce a week ago Saturday in the latest SFPD shooting of a suspect, in an incident that happened the morning of August 6.

“This morning at approximately 7:55 a.m. San Francisco Police officers assigned to Mission station attempted to detain a suspect in the area of 16th St. and South Van Ness Ave.,” the police said in a release that afternoon. “The suspect fled from the officers and a brief foot pursuit ensued. During the foot pursuit an officer involved shooting occurred. The suspect concealed himself behind a vehicle and continued to shoot at officers.”

As required by law of any officer-involved shooting, SFPD is holding a town meeting today to explain the situation. That meeting is in progress right now, is scheduled last until 6 p.m. Monday evening, and is seen below. It should be available on demand after 6 p.m.

But in the days since, we’ve learned some new details. Mission Local reported two days after the incident that “Sources familiar with the situation said that suspect Jose Corvera may have been suspected of bicycle theft. He reportedly had two bicycles with him. More troublingly, the SF Standard added that the Corvera “was firing a pistol that only shot blanks.”

It is understandable that police did not realize it wasn’t a real gun, and Corvera was reportedly pointing and waving it. But what is not clear is who shot first, in an incident that involved five officers firing.

“Office No. 3 conferred with the supervisor on scene that could see a gun in Mr. Corvera’s hand,” and SFPD spokesperson said at Monday’s meeting. “Officer No. 4 ducked behind the driver’s side of the patrol vehicle, while warning officers, quote, ‘He’s standing up again. He’s pointing the gun again.’”

According to bodycam footage played at Monday’s meeting, after the first shots were fired, officers can be heard asking “Was that us?” It appears that at this point, SFPD still may not know the answer to that question.

Thus far, Corvera has been denied bail, and the “fake gun” argument is not swaying the judge. “Multiple witnesses heard and believed that Mr. Corvera had a gun and was firing that gun,” Judge Brian Ferrall said last week, according to the SF Standard.

Corvera’s next hearing is scheduled for this Thursday, August 18.