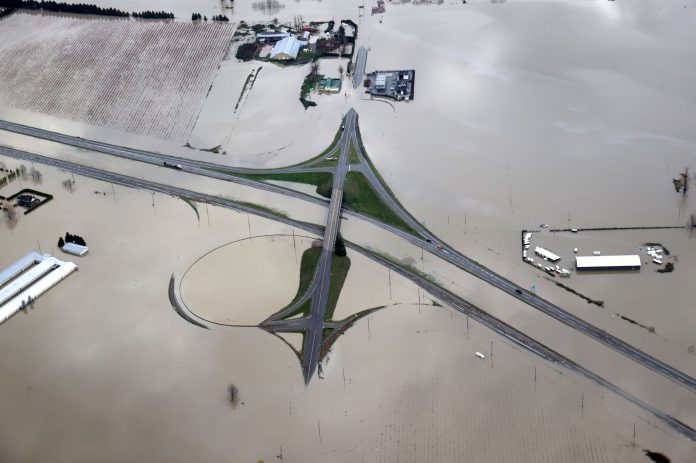 In California, residents are conditioned to fear the “Big One” — an earthquake capable of leveling or severely damaging an entire city or region. But as the climate crisis worsens, environmental scientists believe that it’s not a tremor Californians should worry about most, but rather a megaflood that could engulf the entire state.

On average, an earthquake of a magnitude 8 or higher occurs once a year, globally. However, that frequency in the Golden State is far lower; tremors of such scale historically strike California about every century or so. Should one hit along the San Andreas fault line, the quake could kill upwards of 1,800 people and leave another 50,000 or more with injuries, experts predict — while leaving hundreds of thousands without shelter or access to running water or electricity.

A new modeling study suggests #ClimateChange may have already doubled the likelihood of catastrophic flooding in California, and future warming will likely result in even greater increases in #flood risk. https://t.co/xzTqrZVysh pic.twitter.com/KUS96JhBhn

As dystopian as all of the above sounds, it pales in comparison to what a megaflood could mean for California.

A recently published study in Science Advances delves into how the current scale of the climate crisis has already doubled the chances of a disastrous flood happening in California within the next four decades. Under normal circumstances, such a once-in-a-lifetime flood would be expected to inundate California roughly every 200 or more years. According to Daniel Swain, a climate scientist with UCLA and one of the researchers who led the study, climate change is heightening the frequency of atmospheric rivers like the “bomb cyclone” that hit our region last October. And a megaflood could be spurred by an unrelenting series of those storms over a period of weeks. It’s also happened before — geological evidence points to 300-year flooding events across the state, and one such megaflood in the winter of 1861-62 flooded the entire Central Valley and much of newly built Sacramento, and an estimated 4,000 people were killed by the flood.

“We got kind of lucky to avoid it in the 20th century,” Swain tells the Times.  “I would be very surprised to avoid it occurring in the 21st.”

As the New York Times notes in the California Today newsletter, newly elected governor Leland Stanford “had to take a rowboat to his inaugural events in January 1862,” the state capital was temporarily moved to San Francisco.

Swain describes a megaflood as “a very severe flood event across a broad region that has the potential to bring catastrophic impacts to society in the areas affected.” And in 1862, there were far fewer people living in California — with most residing in the northern parts of the state. In Southern California, after 43 straight days of rain, the Santa Ana river was four miles wide in some spots before it began to recede.d

As CNN notes, Swain compares such a megaflood to the 1,000-year flash flood events seen this summer in the St. Louis area and Kentucky — though the one that’s looming for California would encompass a much wider area. As in… the entire state.

The Times also produced a big visual package over the weekend about a “California megastorm, based on the study.

Swain worked on the study with Xingying Huang of the National Center for Atmospheric Research in Boulder, Colorado.

Experts suggest that California’s lowlands would turn into a “vast inland sea” and displace millions of residents. Hundreds of billions of dollars in the state’s GDP — which is the largest sub-national economy in the world – would be lost. Entire infrastructures and utilities would be lost at both city and county levels. All in all, it’s predicted that if such an event transpires, it would cost a trillion dollars to bounce back from the damages, recovery would take years if not decades, and some municipalities might even be damaged to the point of being irreparable and uninhabitable.

Hey users of our National Hydrography Dataset! We've got an update that makes it easier to align hydrography features like rivers & lakes to elevation surfaces: https://t.co/vO9JU3tymz We've also got a website for updates to the NHD. #mapping #data #hydrography pic.twitter.com/SasTZ3oVed

And yes: This would be the most costly natural disaster in human history, by far. As of now, Hurricane Katrina still holds that title after it struck the Gulf Coast in 2005, causing an estimated $172.5B in collective damages to the Louisiana and Alabama coasts.

Unlike a flash flood, the megaflood event that could potentially hit California as early as 2047 wouldn’t be an overnight occurrence. Weather models extrapolated from the data in the study show the flood would come by way of a 30-day cumulative precipitation pattern affecting the entire state of California.

Coupled with a growing amount of burn-scarred areas — which are less able to absorb excess rainfall than healthy soils — and the state’s steep terrain, as well as yearly snowmelt runoffs found in higher elevations, it’s a perfect storm for a disaster unlike any seen in human history.

The chance of this happening increases exponentially as the “global mean temperature anomaly” is extended by the climate crisis. Warm-phase El Niño years will also play a role in determining when such a flood will strike; the weather models suggest that after the “tipping point” between the average likelihood of a megaflood happening at this scale sits at around the two-degree Celsius mark for observed median global temperature increases.

While the bulk of human-caused global warming sits in the hands of just 90 companies — businesses that have, on average, contributed 63% of the greenhouse gasses emitted globally every year — there’s still something we can do as individuals to thwart the climate crisis and, by proxy, the chance of a megaflood swallowing California within the coming decades.

“If we work together to decrease future emissions, we can also reduce the risk of extreme events,” Xingying Huang, another of the authors of the study, said to CNN. In tandem with decreasing our collective greenhouse gas emissions, and bolstering California’s flood and water management systems, Swain believes “the extent of [megaflood] losses can be significantly reduced.”

Photo: In an aerial view, floodwaters cover a section of highway 1 on November 20, 2021 in Abbotsford, British Columbia. The Canadian province of British Columbia declared a state of emergency on Wednesday following record rainfall earlier this week that has resulted in widespread flooding of farms, landslides and the evacuation of residents. (Photo by Justin Sullivan/Getty Images)