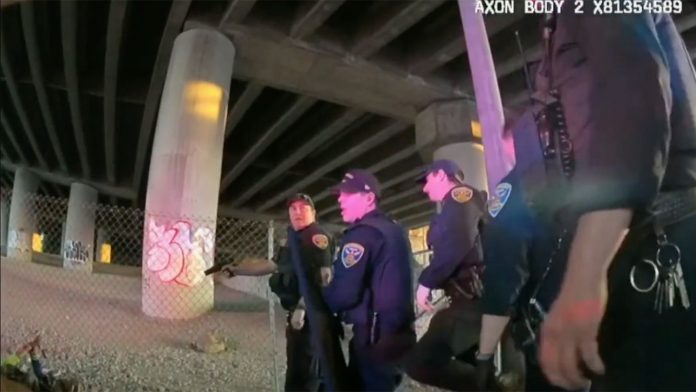 The SFPD fulfilled its transparency obligation to hold a virtual town-hall meeting Friday — late in the afternoon before a holiday weekend — to discuss the events of May 19 that led to police fatally shooting two men who had been engaged in a fight with each other.

Since the hours after the shooting, information has been hazy about what occurred under the I-280 overpass near the intersection of Mariposa and Owens streets on the evening of May 19. The general outline is that police were called to the scene of a fight between two homeless men, at least one of whom was armed with a knife. Both men would end up dead, and a medical examiner’s judgement that came out earlier this week suggested that both men were killed by police bullets.

At Friday’s town-hall meeting, SFPD Chief Bill Scott expressed his condolences to the families of the two men, who have been identified as 57-year-old Michael MacFhionghain and 49-year-old Rafael Mendoza.

“We recognize, too, that officer-involved shootings can have traumatic effects on members of our community, especially individuals and their families and loved ones who have suffered traumas of their own in encounters with the criminal justice system, whatever they may be,” Scott said.

“I want to emphasize that this incident is subject to multiple independent and ongoing investigations,” Scott added, explaining that not all information can yet be released in connection with this case due to those investigations.

Commander Paul Yap gave the presentation of the body-cam and witness-cellphone footage from the incident.

The call for police came from a reporting witness who was driving by the scene in her car, and she described seeing a homeless man “beating the crap” out of a tarp-covered shelter with two sticks, and she said she believed there might be someone inside because she could see movement from inside the tarp. The person with the sticks appears to have been Mendoza, and the person inside the tarp appears to have been MacFhionghain.

“At approximately 8:01 p.m., two Bayview officers arrived on scene,” Yap said. “Officers observed two subjects on the ground next to a brown tarp, which was located behind a low concrete and steel wall underneath the freeway overpass… Both individuals were lying on the ground in an active physical struggle involving a knife.”

An enhanced image showing the frozen struggle that officers came upon.

After watching multiple angles of what occurred it seems apparent that a) MacFhionghain refused to drop his knife in his struggle with Mendoza, and Mendoza was holding his wrist in place to keep from being stabbed (he may have already been stabbed once); b) police shot one or both men with non-lethal projectiles while demanding that MacFhionghain drop the knife; c) there is a mention of a second knife in the struggle, though its location is not clear — and the SFPD says they found three knives in total; d) the action that precipitates lethal shots being fired is MacFhionghain rising up and appearing to plunge the knife downward toward Mendoza.

There were about a dozen SFPD officers hovering around the men, some shouting commands, and it’s unclear how many of them decided to shoot, but it seems like too many of them did, especially given that no one was threatening them and they were essentially trying to break up a knife fight.

SF Deputy Public Defender Alexandra Pray spoke to KTVU, saying that she had represented Mendoza in a previous case. “I was absolutely horrified to learn that SFPD officers shot and killed my client Mr. Mendoza,” Pray said. “He was an unhoused father who lived a life of desperation. In all of my interactions with him, he was very sweet and gentle, even though his struggle to survive often entangled him in the criminal legal system for mostly petty and non-violent offenses.”

She called it an “inexcusable tragedy” that Mendoza had to die at the hands of police who were there to stop him from being further harmed.

The Public Defender’s Office also criticized officers for not recognizing Mendoza’s lack of English-speaking skills until late in the incident.

“Although the initial force used was from beanbag projectiles, officers quickly escalated to lethal force,” the office said in a statement. “It was later confirmed that both men died from the gunshot wounds.”

“The inability or unwillingness of police to truly de-escalate harmful situations remains a paramount concern for public safety in San Francisco,” said SF Public Defender Mano Raju in a statement. “The answer to violence is not more violence.”

California Attorney General Rob Bonta and his office are investigating the incident, as are multiple other agencies.

Previously: Medical Examiner Suggests SF Police Officers Fatally Shot Two Men, One of Whom Was Unarmed, One Had Knife